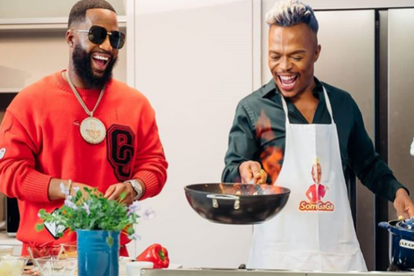 Cassper Nyovest and Somizi Mhlongo share a special bond that they are both grateful for. Image via Instagram @somizi

Cassper Nyovest and Somizi Mhlongo share a special bond that they are both grateful for. Image via Instagram @somizi

South African rapper, producer and businessman Cassper Nyovest could not be more grateful for his friendship with media personality Somizi Mhlongo. It’s bonds like these that some search a lifetime for.

Finding a loyal friend in the entertainment game is not always easy, and Cassper knows this. Somizi has been by his side every step of the way… he’s Cassper’s personal hype squad!

Cassper has had a lot of big moments lately. Signing multimillion-rand deals, getting boujee whips, celebrating a birthday and launching his alcohol brand Billiato… and Somizi could not be more proud of his friend.

Just recently Somizi attended the Billiato launch party which doubled up as a birthday celebration for Cassper. Seeing Cassper level up, had Somizi feeling all kinds of pride.

ALSO READ: CASSPER VS SLIK TALK: EVERYTHING YOU NEED TO KNOW ABOUT THE BOXING MATCH

Taking to his Instagram page, the flamboyant star shared a clip of him hyping up Cassper at the launch event. Somizi made it clear that he will be there for Cass.

“I will never tire from supporting my friends and I know the feeling is mutual…but the support is also not limited to just my friends…I give it whenever and wherever I can…it takes absolutely nothing from me.”

Seeing his friends unwavering support, Cassper was overcome with emotion and at a loss for words. He knows he’s got a good one and he is grateful!

Cassper has worked hard to get to where he is today and many doubted him along the way. So, knowing he has people like Somizi by his side, means a great deal.

Cassper and Somizi are not the most likely to have become friends, and we think that is why their friendship has worked out so well.