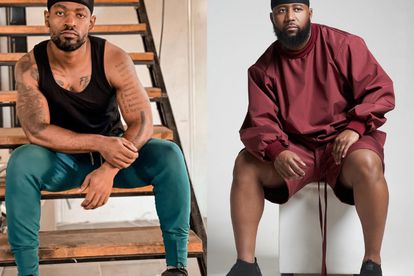 Two of Mzansi’s top musicians are back at each other’s throats. Cassper Nyovest and Prince Kaybee got into it on Twitter, aiming at each other with some hectic shots.

KAYBEE TAKES A SWIPE AT CASSPER

Gugulethu hitmaker Prince Kaybee took to Twitter to share his thoughts about celebrities being disconnected from their fans. Interestingly enough he noted celebrities giving their celebrity friends samples of their products instead of gifting people who could potentially bring value to their product.

“It’s basically like Sandton and Alexandra, you work the land of the rich but don’t benefit from it although its just across the street from you.”

It was pretty clear that Prince Kaybee was singling out Cassper Nyovest, seeing as he has been sharing snaps with his celebrity friends showing off his new sneaker the Root of Fame 990s. He shared photos with YouTuber Mihlali Ndamase, DJ Sumbody and Kefilwe Mabote.

Responding to the tweet, Cassper once again emphasised that Prince Kaybee should sign the contract for their boxing match.

“The tweets ain’t gon make you more famous or more money. My shoe is doing well, I have the biggest song in the country & I can’t wait to knock you out o marete!!”.

The two have been in talks about their boxing match for quite some time now but the two went silent about it on Twitter leaving fans to speculate about what was going on. Taking another aim at Cassper, Prince Kaybee revealed how much he was offered by the Baby Girl rapper for the match.

Believe it or not, Prince Kaybee was offered R350 000 which he claims he makes in a ‘dry month’. He demanded a whopping R2.5 million for the fight. He then took a swipe at Cassper’s success saying he’s not afraid of his ‘fake wealth’.

“I’m not scared of your fake wealth papa, put your money where your mouth is.”