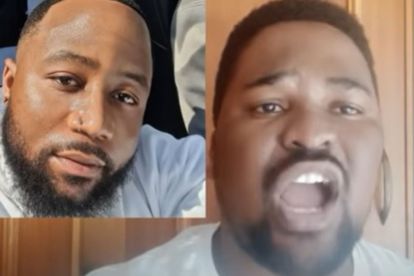 It seems Slik Talk’s respect for Cassper Nyovest was short-lived after the YouTuber took aim at the rapper in another scathing attack.

The celebrity commentator had previously praised Cass following his defeat in their highly publicised boxing match in December. But Slik Talk is taking it all back after Cassper revealed that he had banned podcasters MacG and Sol Phenduka from attending his upcoming match.

Cassper will go up against rap rival Naakmusiq in a boxing match on Saturday 9 April at Sun City’s Super Bowl.

Speaking in another heated YouTube video, Slik Talk reacted to news that Cassper had “banned” MacG from attending his boxing match. Cass also reportedly snubbed Sol Phenduka, who was a commentator at his match against Slik Talk.

But the YouTuber thought the decision was foolish. He said in the video: “After all this time, you still have the emotional intelligence of a teenage girl

“Let me give you a reality check: without MacG and Sol, there would be no boxing match. These guys gave me a platform and a co-sign when everyone labelled me a troublemaker

“There would be no match between you and I without these guys. You should be praising them for what they did, they gave you the clout.

“How dare you replace Sol who did such an amazing job. You needed him that time, because you needed the clout. Now you don’t need him anymore, you have sponsors”.

Slik Talk then went on to label the marketing campaign behind Cassper and Naak’s boxing match as “trash”.

He added: “Cassper Nyovest you are sadly mistaken if you think you made it and this thing is huge because of you. We all contributed…it’s not just about you”.

CASSPER RESPONDS: ‘I DON’T GET OFFENDED’

But despite Slik Talk’s angry rant, Cassper bears no grudges.

In fact, he’s thanked the YouTuber for promoting his fight. He said in an interview with Robert Marawa on Tuesday: “He’s smart enough to know that the more I talk like this, the more attention I get. And he got money from it.

“I dont get offended anymore after meeting him. He’s helping me, he’s promoting [the match]. As long as everyone is talking about it”.

He added: “He’s got a lot of energy. But what’s weird is that he didn’t have that energy that night when I was standing across from him in the ring.

“After I beat up Slik Talk, he just became a comedian. After meeting and interacting with him, I realise he’s not who he plays on the internet. He’s actually a very soft and good kid”.