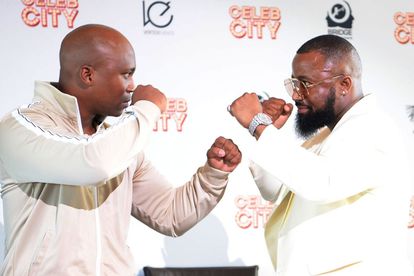 He knocked Slik Talk out in December 2021, will Cassper knock NaakMusiq out too? The highly-anticipated fight against the two South African musos is set to take place on Saturday 9 April in Sun City, North West.

Cassper Nyovest has curated an A-list experience in Sun City that will kick off on Friday 8 April and end on Sunday 10 April with an afterparty. The Celeb City experience kicked off with Cassper and NaakMusiq weighing in for the fight on 8 April.

Thereafter, some of Mzansi’s biggest musos will perform their biggest hits. There will be performances from Big Zulu, Blxckie, amapiano stars, Young Stunna, Kamo Mphela and Osama hitmaker, Zakes Bantwini.

Speaking to Mail & Guardian, Cassper said he was aware of the quality issues his team faces during the fight against Slik Talk last year.

“We are definitely providing way better quality. Stay put for our big broadcast platform announcement. First fight was a big learning experience for myself and the entire team and we are well prepared for this next one,” he told the publication.

If you were hoping to see the fight at Sun City, sadly tickets are already sold out. Although the fight will not be live-streamed, Mzansi will be able to catch the action on DStv, Supersport channel 209 at 18:00.

Mzansi has already placed their bets on which local muso will win the fight. One tweep wrote: “I really hope Cassper wins this fight.”

“I’m sorry Cassper Nyovest is going to lose this fight. Naak Musiq is from Eastern Cape where legends are born and made,” wrote another tweep.

“I’ve just put a R1k bet on Cassper and Naak Musiq fight. I’m betting on Naak, did I do right?”