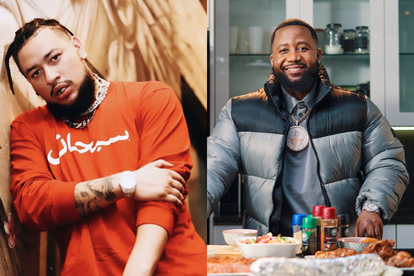 Cassper just threw some shade at AKA. Images via Twitter: @AKA/@CassperNyovest

Cassper just threw some shade at AKA. Images via Twitter: @AKA/@CassperNyovest

Cassper Nyovest recently left Twitter users intrigued with his response to a comment that was made about his long-time nemesis AKA being wealthy.

In fact, his reply left many people wondering if there is something that he knows that they don’t about what’s inside the Fela in Versace rapper’s wallet.

Recently South African hip-hop artist Cassper Nyovest found himself going face to face with a Twitter user who basically trolled him for getting slapped by AKA outside a nightclub in 2015.

The rapper responded by saying that he is happy that he decided to walk away from what could have been a massive fight that would not have only impacted his career, but his wealth as well. He also went on to say that because he walked away he is now very wealthy and has a “clean brand”.

The troll obviously didn’t leave it there and continued to say that AKA is stinking rich too — something that Cassper surprisingly laughed at. See the exchange below:

Netizens starting putting 2 and 2 together

Obviously, Cassper’s reaction was seen as very shady by tweeps who believed he was implying that AKA is not as rich as many of his fans believe he is. Many of them took some time to respond to Cassper’s LOL tweet by asking the rapper to reveal a little more.

Here are some of their comments below:

“It’s your laughter that kills me. It’s like you know something we don’t know”

How much are these rappers worth anyway?

The numbers however are quite confusing since various articles reveal vastly different net worths for both rappers. Guess we’ll just have to wonder whether or not Cassper is being a hater or whether he really is richer than AKA.