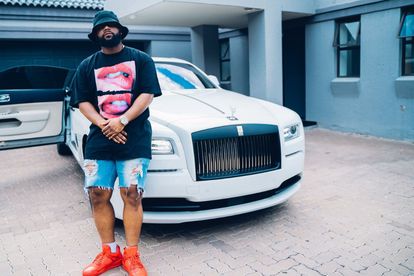 Rapper Cassper Nyovest is the latest celebrity to share how he would be losing money due to President Cyril Ramaphosa’s announcement that South Africa is moving to Level 4 lockdown this past Sunday 27 June.

The introduction of the lockdown means that public gatherings and the sale of alcohol are banned. This has affected a lot of household’s incomes, businesses and performing artists, such as Nyovest.

For starters, the rapper had to cancel his Roof of Fame event due to the implemented Level 4 lockdown.

Nyovest shared on his social media account that he now has to postpone his Drip Footwear launch and has to let some of his employees go.

The rapper announced earlier this month that he signed a deal with a shoe brand Drip Footwear worth a cool R100 million.

The father signed the so-called legacy deal under his Family Tree Records label with Drip Footwear.

He shared the news on social media by posting a video of himself and Drip Footwear founder Lekau Sehoana at The Leonardo, in Sandton City.

When his fans enquired if he’s broke after sharing the news. The rapper clarified that he can survive years without an income, and he is only worried about his employees.

The father of one also shared his disappointment for newspapers reporting on celebs falling on hard times due to the COVID-19 pandemic struggling to pay off their homes and cars.

This is after City Press reported that actress Thembi Seete paid more than R50 000 last week to avoid being evicted from her house last week.

Musician Nomuzi Mabena was another media personality who trended in March after Daily Sun reported that her luxury vehicle could be repossessed.

It was reported that the lender had taken the MTV Base presenter to court after failing to reach her.

The lender demanded the rapper cough up R422 372.55 in full with immediate effect.

Despite lawful written demand, the defendant failed to make payment of the arrears. The plaintiff has elected to cancel the instalment sale agreement, take repossession of the vehicle and claim the difference between the outstanding balance set out in paragraph 5 above and any amount realized from the sale of the vehicle in future.