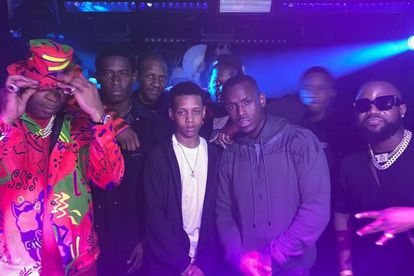 Rapper and businessman Cassper Nyovest jetted off to the United Kingdom for AmaFest on Saturday 3 September. While abroad, the Tito Mboweni hitmaker rubbed shoulders with Hollywood A-listers Dave Chappelle, Chris Rock and rapper Busta Rhymes amongst others. Taking to Twitter on Tuesday 6 September, Cassper described the evening as “legendary”.

The stars partied together after Dave Chappelle and Chris Rock performed a stand-up show at the O2 Arena in London on 5 September.

In a Twitter thread on 6 September, Cassper Nyovest detailed how he spent the previous evening with the likes of comedians Dave Chappelle and Chris Rock and award-winning music stars Busta Rhymes, Giggs and Talib Kwei. He explained that he took no pictures of the event because there were no cameras allowed.

“Honoured an invite from a good friend and it turned a legendary night,” wrote Cassper.

The platinum-selling rapper explained how Busta Rhymes pushed him to the side because he was unaware of who he was.

“I moved respectfully, that’s when Dave Chappelle let him know who I was. Busta[‘s] energy changed immediately, he then told this crazy story about meeting me through Swizzy and how it influenced his next album. MADNESS!”

Taking to Instagram on Wednesday 7 September, Busta Rhymes shared a few pictures from his party with the other Hollywood stars.

“Last night we had to slide over to London to make sure our folks on the other side of the pond got the fullness of what that #DaveandBusta Experience was all about after Dave & Chris smashed it at the O2 Arena!!” wrote Rhymes.

“So many other kings and queens that pulled up!! The blessings ain’t stoppin’!!!”

Cassper Nyovest and Priddy Ugly confirmed their boxing match on Friday 26 August. After a few heated exchanges on Twitter, the two will finally face off at the SunBet Arena on 1 October.

“It’s official. 1 October. I’m back in the ring. Sun Arena will never be the same. No long talk. It’s about to get ugly. Tickets out now,” wrote Cassper on Instagram.