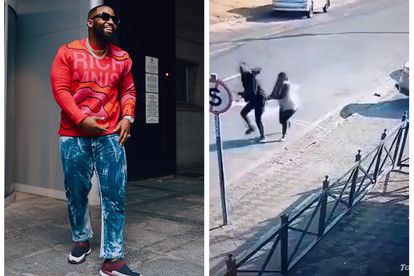 Cassper Nyovest has praised a South African woman who fought off a cellphone thief in a viral video.
Image via Twitter

Cassper Nyovest has praised a South African woman who fought off a cellphone thief in a viral video.
Image via Twitter

A video of a woman physically fighting off a thief who snatched her cellphone has gone viral – and won the praise of rapper Cassper Nyovest.

The muso reacted to the video which had tweeps reeling in both anger and admiration for the woman.

In the clip, the woman is seen walking down the street holding her cellphone in her hand. In the opposite direction, a man approaches her and snatches it out of her hand. The man then flees to a nearby getaway car but is prevented from escaping by the woman who attacks him from behind.

A fight ensues and the woman is able to retrieve her cellphone back from the unsuspecting criminal. In the scuffle, the woman also slams the getaway car door on the man’s arm.

“The bravest woman in South Africa” reads the caption on the viral video.

The video caught the attention of Cassper Nyovest who sympathised with the woman.

He responded to the tweet: “It’s not bravery. It’s painful. Working so hard to provide for yourself, only for someone to just snatch it from you. F**K THAT!”

Despite warning the woman that things could have backfired on her, tweeps praised her bravery in the midst of danger.

@ChiefChincafe: “Jackie Chan should hire her for that stunt, that was fast thinking”

@DeziJordyn2303: “SAPS should hire this lady”

@Forever_BlackZN: “I admire her strength”

@IamJayeMelo: “He messed with the wrong one that day”