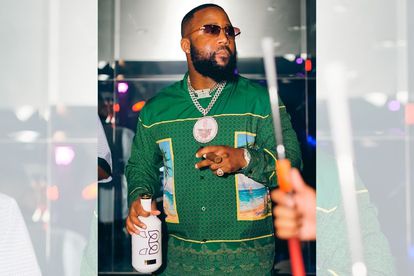 Cassper Nyovest has set the record straight on claims he does not own the alcohol beverage Billiato.
Image via Twitter
@casspernyovest

Cassper Nyovest has set the record straight on claims he does not own the alcohol beverage Billiato.
Image via Twitter
@casspernyovest

Cassper Nyovest has clapped back hard at claims he does not have ownership rights to his alcohol beverage Billiato.

The allegations were made by controversial celebrity commentator Musa Khawula who accused the rapper of being the face of the brand.

In a tweet on Tuesday afternoon, Musa claimed that Billiato was owned by a businessman by the name of David de Mardt.

“Billiato is an alcoholic brand paraded by Cassper Nyovest as his own”, tweeted Musa who is known for his shady posts about Mzansi’s stars.

But Cassper simply laughed off the claims. “False”, he responded to Musa’s tweet.

“I am the majority shareholder of Billiato. Not only am I an owner but I’m the founder, the CEO, and the marketing director! I own my products. I’m not a brand ambassador or an influencer”

“Billiato applying too much pressure I see. Your support is shaking the tables of these big businesses. Don’t be fooled. They probably planning a smear campaign as we speak. We will not fold. We taking over”

Cassper also slammed the credibility of Musa. He tweeted: “The funniest thing about this post is that this isn’t even David De Mardt. Yall just be blogging and reporting rubbish. If you can’t even get a picture of David, how could your information be correct? Stop spreading lies”.

AKA WANTS A STAKE IN SPIRITS TOO

Meanwhile, AKA has also revealed plans to dabble in the alcohol industry. This, after he formally ended his endorsement of Cruz Vodka in a statement this week

The brand revealed that AKA wished to branch out on his own and create his own range.

ALSO READ: Cassper Nyovest shaded for making Rick Ross shout-out ‘all about himself’

On Tuesday evening, the rapper shared a post hinting that his plans are already in the pipeline.

“Cheers to the beginning of the new era”, he captioned a picture of him holding what appeared to be sample bottles of clear spirits in front of a vineyard.

AKA and Cassper are not the only stars with alcohol brands. Bonang, Pearl Thusi, Khanyi Mbau, Kelly Khumalo, and many more are also supplementing their income with sales from their official alcohol drinks.