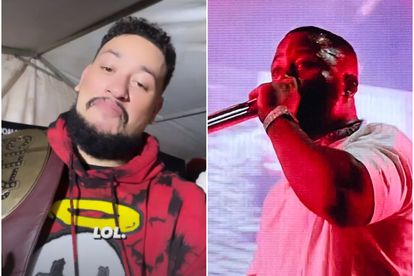 Whilst AKA and Naakmusiq were throwing shade at Cassper Nyovest  – again – the latter was performing his heart out on the Cotton Fest stage on Saturday night.

Cass was a special guest at the annual music festival helmed by the late rapper Riky Rick, who died from suicide in Feburary.

At Riky’s funeral last month, Cassper revealed that his friend had planned for them to appear on stage together to “publicly” bury the hatchet between them.

However it didn’t go according to plan and instead, Cassper took to the stage solo.

Cassper took to the stage at Cotton Fest in Newtown, Johannesburg to the delight of the crowd. Joining the likes of Nasty C, Moonchild Sanelly and others at Saturday’s show, the star gave a stellar performance, and performed some of his biggest hits including Phumakim and Gusheshe.

The emotional Billiato boss dedicated his show to his best friend, who tragically ended his life at the age of 34 years old.

Sharing a pic of the two friends embracing each other, he tweeted: “This one is for my brother. You planned to bring me out as a surprise tonight & we didn’t have that moment.

“My first time on your stage and you’re not here in physical form but I know you’re with me and the rest of us in spirit. I love you and I miss you Rikhado.  #CottonFest2022”.

He added: “Thank you Cotton Fest. My heart is warm. He definitely was with us tonight”.

And fans were loving his energetic performance too.

Theboydontcare: “What Cassper Nyovest did at Cotton Fest stage was amazing. Damn what a performance!”

@Phuttym19: “MUFASA MUFASA MUFASA!! Cassper Nyovest left his heart on that stage. What a moment”

@reneilwe__R: “Cassper is a living legend. What a performer #CottonFest2022”

Others even mentioned Cassper’s “haters”

@nankuFlash: “Don’t be fooled by Twitter clout. @casspernyovest  is loved and he deserves all the love. He’s a great performer. Gets the crowd involved”

@Kariiee_: “Cassper Nyovest is LOVED! All this hate is just for clout”

Meanwhile AKA – along with Naakmusiq, who won his Celeb City match against Cassper earlier this month – poked fun at the latter on Instagram

Holding Naak’s winner belt over his shoulder, AKA said the word: “LOL”. Naak joined in on the shade by mouthing the words to Pheelz’s hit song Finesse.

The duo were performing at the “Famous Friends” concert in Queenstown, Eastern Cape.