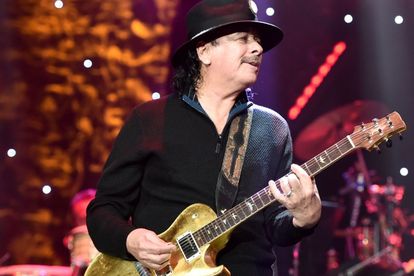 10-time Grammy winner Carlos Santana is doing well after he collapsed on stage during a performance on Tuesday 5 July. Image via Twitter @

10-time Grammy winner Carlos Santana is doing well after he collapsed on stage during a performance on Tuesday 5 July. Image via Twitter @

Legendary Mexican guitarist Carlos Santana left fans worried about his health after he passed out on stage during a performance at the Pine Knob Music Theatre outside of Michigan, United States on Tuesday 5 July. The 74-year-old muso took to Facebook on 6 July to reassure his fans that he was doing okay after the incident.

The 10-time Grammy winner is one of the best guitarists in the world and has serenaded music lovers with his talents since the 1960s. With hits like Maria Maria, Smooth and Black Magic Woman, he is still at the top of his game.

Guitarist Carlos Santana passed out while on stage at an outdoor amphitheatre just outside of Michigan.In a video posted by @TrivWorks on Twitter, Santana walked over the ledge where the drumkit was and passed out.

Emergency services rushed on stage to assist the guitarist and fans cheered as the muso was taken to the nearest hospital for a checkup. In the video, a concert-goer asks: “Is he okay?” and another says: “He just passed out”.

As per Santana’s website, the muso was “overtaken” by heat exhaustion and dehydration during the performance.

In a short Facebook statement on 6 July, Santana thanked his fans for their thoughts and prayers and reassured them that he was okay.

“Forgot to eat and drink water, so I dehydrated and passed out,” he wrote.

“Blessings and miracles to you all.”

His manager, Michael Vrionis, said the legendary muso was doing well following the incident. A concert that was scheduled for Wednesday 6 July at the Pine Knob Music Theatre has been postponed.

MORE THAN TWO DECADES OF MUSIC

Having been in the music industry for more than two decades, Carlos Santana has collaborated with the best of the best and achieved more than 20 awards while doing so.

In 1997, he received his star on the Hollywood Walk of Fame and the following year, he was inducted into the Rock and Roll Hall of Fame.

Over the year, Santana has collaborated with the R&B star Lauryn Hill, Aerosmith frontman Steven Tyler and American rapper Tyga.