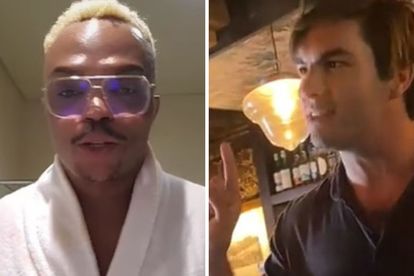 While entertainer Somizi has acknowledged the effort Cape Town man Chris Logan took in confronting the “racist” owners of Hank’s Olde Irish pub, in the same breath, he claims it was something that should’ve been done “decades ago.”

The radio and TV personality weighed into the racial attack of a black patron – Thabiso Danca – who was denied entrance at the Cape Town pub. In a clip that has gone viral, Thabiso’s friend Chris angrily approaches one of the owners, forcing him to apologise for his actions.

ALSO READ: ‘Clap for him’: Praise for white man who confronts ‘racist’ [watch]

Sharing the viral clip, Somizi shared his feelings over the racist encounter. He posted: “What this young man(Chris Logan) did should have been done decades ago.”

However, he quickly added: “But it’s never too late. Let’s protect him. Because there are racists out there who are mad at him for this

Somizi also promised to visit the pub but acknowledged that social media had prevented users from tagging the pub – Hank’s Olde Irish, located in Cape Town.

And Somizi’s followers agreed. Here’s what they had to say in the comments section.

Nomonde1: “Christopher needs to be protected. We need more human beings like him.”

Mswisani: “‘It’s not a calm situation.’ Kudos to Christopher. Love him for this!”

Tmakgotla: “I’ve lived in Capetown. I know this rubbish… gotta love this guy.”

Nceshdee: “I love it when a white man sees the racism and speaks up!”

WHAT HAPPENED IN THE VIRAL CLIP?

In the clip, a man named Christopher Logan is seen confronting the “racist” owner of a pub – later identified as Hank’s Olde Irish Pub in Cape Town – about his decision to allegedly restrict people of colour from entering the establishment.

According to Christopher, the pub’s bouncer questioned his black friend Thabiso Danca, who claimed he was “not allowed” to enter “without a white person.” According to the bouncer, this was due to the pub’s right of admission.

Speaking to the owner, Christopher is filmed saying: “You think you have the right to tell whoever you want to come in, you don’t…You don’t have the right to discriminate against anyone in this country – it’s a crime”.

He added: “This is firstly a crime in this country. You exist in South Africa, where we have a deeply painful history of this”. He continues: “Do you think this is all right? Is this the practice of the business?”.

Becoming irate at the man’s denial, Christopher then orders the owner to apologise for his “racist” behaviour.

He adds: “Look at this man in the eye and apologise, is a good place to f**king start. Recognise the seriousness of this situation”.

The owner then offers a sheepish apology to Thabiso after Christopher threatens to inform the public about the racial attack.

Watch the incident play out below…

Despite his “apology”, the owner of Hank’s Old Irish Pub did a U-turn on claims they discriminated against non-white patrons. They also denied claims that they were “racist”.

In a statement to the SABC, they said: “In the past 30 years of operating business in Cape Town, we as owners have never nor have we ordered our staff to discriminate on any basis whatsoever, whether that be gender, sexual orientation or race”.

After the video went viral, the owners then claimed they were “concerned” for their safety. To add insult to injury, the pub owners claimed they had opened a case of assault against the men who confronted them.