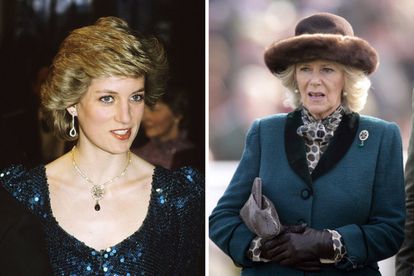 Camilla, the Duchess of Cornwall and wife of Prince Charles, is back in the spotlight, this time for a piece of jewellery that Princess Diana once wore herself.

It is no secret that Princess Diana’s jewellery is perhaps the most well-known, from her sapphire engagement ring (now worn by the Duchess of Cambridge), to her spectacular emerald and diamond necklace.

The late Princess Diana wore it as a necklace at the gala performance of Love For Love at the Vienna Burgh Theatre on 14 April 1986 in Vienna, Austria.

According to Woman & Home, like many of the Princess of Wales’ prized jewellery items, it was a royal heirloom and this necklace was passed to her by the Queen Mother in honour of her marriage to Prince Charles.

Following Princess Diana’s tragic death in 1997, ownership is technically understood to have reverted to the Queen.

This is also the case for many other royal jewellery items and the Queen has since loaned it to Duchess Camilla to wear.

Though it seems the Duchess of Cornwall wasn’t such a fan of the necklace design, as when pictured wearing the piece it now appears detached to become a stunning brooch.

It is believed that the most memorable occasion where the Duchess wore Princess Diana’s former necklace was at a Buckingham Palace reception to mark the 50th anniversary of Prince Charles’ investiture as the Prince of Wales in 2019.

The occasion has since made headlines, with Charlotte White, Head of Design at online diamond jeweller 77 Diamonds, reflecting that her decision could have been perceived as “jarring” given the Princess and Duchess’ history.

As reported by Express, White said that the “notion of Camilla wearing a sparkling emerald and diamond brooch that once rested gracefully as a pendant on Diana’s skin and close to her heart, does feel somewhat jarring when you think that many years ago Camilla was Diana’s husband’s lover.”

“The 158-year-old jewel does contain within it an undeniable link to Prince Charles, the man to whom both these women are inextricably linked,” White said further.