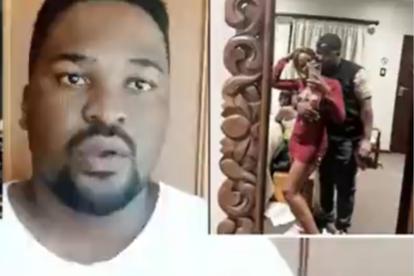 South African amapiano artist Busta 929 has once again landed himself in trouble of photos surfaced of him with a girl who is allegedly only 15 years old. In 2021, the musician went viral after a video surfaced of him partying with underage girls at his house. YouTuber Slik Talk has decided to share his thoughts about Busta’s actions and let’s just say, it was another controversial video.

Slik Talk gained himself a reputation as a celebrity basher and seems to be back online doing his thing following a short break from making videos.

The controversial YouTuber just pointed his flaming guns at amapiano artist Busta 929 who has been dubbed the “amapiano R-Kelly” after photos surfaced of him with a girl who is allegedly only 15.

In the video which was shared by Slik on 21 February 2022, Slik says that Busta is basically begging to go to jail and has been moving very weirdly for a while now.

Referring to a statement previously shared by Busta regarding his house party that was crawling with underage girls, Slik said that there is no talking himself out of trouble this time.

“You’ve been moving weird for a while now. At this point you are begging to go to jail, there is space for you there…There is no defending this my n*gga.

“If you think you’ve made it and there’s no way you’re going to jail, there is space for you there. I just saw that photo of Busta 929 and that minor and it is distasteful, damn near disgusting” he says in the YouTube video.

After hearing what Slik Talk had to say, many Tweeps commented on the fact that he had not insulted Busta 929 but instead spoke the reality of the situation. Here are some of their comments:

“I don’t know if it’s the topic or he rebranded, nigga approached this with sensitivity and spoke facts”

“I never thought I’d ever agree with other Slik Talk but this Busta person is begging to go to prison.”

ALSO READ: Shock footage: DJ BUSTED for partying it up for days with underage girls