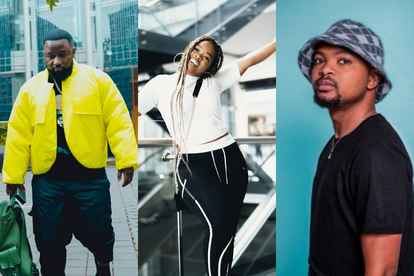 South African singer Boohle has landed herself in hot water making a controversial appearance on Mac G’s podcast last week. During the podcast, she revealed how she was the brain behind her hit song Siyathandana that features Cassper Nyovest. She also spoke about musician Josiah De Disciple and he is not impressed.

Mzansi singer and Siyathandana hitmaker Boohle seem to have upset many people after doing an interview on Podcast and Chill with Mac G.

First, she left Twitter buzzing after she was heard saying that she wrote Siyathandana leaving Twitter users shocked that she was downplaying the rapper’s role in making the song the success that it is. She soon started trending as Mzansi weighed in on what she had to say. Shortly after that, Cassper also weighed in:

“This is so disappointing and I’ve watched it a few times. I won’t even explain anything about how this song was written but I have so much love for Boohle, man. One of the most gentle of souls I’ve met and we made magic together. May God bless her, May she make many more hits,” he wrote.

Cassper isn’t the only one who caught feelings. Josiah De Disciple, a former member of JazziDisciples was also mentioned by Boohle in the podcast. Answering questions on whether she had beef with the mother of his child she said:

“The honest truth is there is not drama behind that song. I wrote the song Mama. I had just met Josiah…[if] I’d just met you how in the world would I know your business? I’d just come to his house, I see the wife and the kid and then I’m like okay fine, I’m just here to work. I wasn’t there for anything else.”

Josiah did not appreciate this and took to Twitter where he warned his fans about inviting people into their homes. He also touched on how Boohle was burning bridges over a podcast.

“One thing I learnt is that be careful who you welcome into your personal space. A few invites into my studio & home & already you wanna mess shii up because of a Podcast?”

“Listen this industry is full of flip-floppers! Most go wherever the wind blows, I don’t know if it’s social media hype or instant fame that can’t be handle. The smaller the circle the better.”

“But what did Boohle say about Josiah in this interview besides saying she doesn’t get along well with his wife? Maybe I missed something🤷🏽‍♂️”

“Honestly, Boohle was tryna protect the meaning of the song. She felt the opposite vibe along with your wife, and never said anything bad afterward. So ya’ll are bashing her for what MacG did. MacG was the shit in this interview. I feel like ya’ll need to man up to MacG honestly”

ALSO READ: Reason ditches hip-hop for amapiano and Cassper has quite the opinion