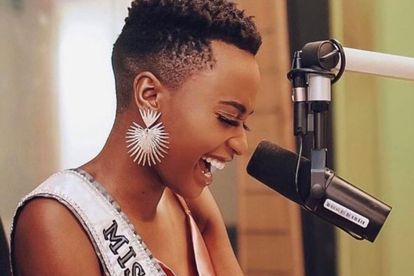 Former Miss Universe Zozibini Tunzi made her radio debut on Power 98.7 on Wednesday 11 August, leaving fans gushing over her stellar job as a radio host and her voice after she sang Mavuso’s hit Sunday Blues.

The beauty queen along with minister of human settlements Mmamoloko Kubayi-Ngubane and brand influencer Mihlali Ndamase took over the airwaves for Power FM’s three-day campaign called #987Women which launched for the seventh year in a row under the theme “to those who show up differently, we say power”.

Zozibini Tunzi stole the show on the mid-morning show, Power Talk from 9am to 12pm. She got in bright and early at 7:30am for a briefing session with the producers. She was later welcomed in by the 1997 song You Are The Universe by The Brand New Heavies.

During the first hour of the show lines opened up for callers to engage with the beauty queen. Callers were majority men and many were so overwhelmed that they couldn’t construct a sentence properly. Some called just to say “hi” while others gushed over her beauty and another asked more serious questions like “what would you do if you were president?”.

After Tunzi’s break during the news bulletin, magazine editor Asanda Sizani called in to ask Tunzi about representation, diversity and inclusion.

A LOOK AT ZOZI IN STUDIO

The former Miss Universe showed up in a pair of cropped jeans, a white T-shirt with “the universe needs girls” written across it and a blue blazer matched with a pair of silver heels.

Fans were in awe of the multi-talented queen’s job as a radio host and her amazing voice as a vocalist. Is somebody getting Zozi a record deal?

ALSO READ: ‘Are you not embarrassed?’ Zozibini Tunzi responds to skinny shaming