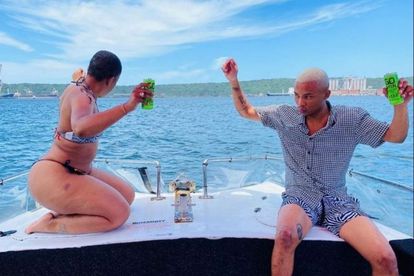 Zodwa Wabantu and her “Ben 10” boyfriend Ricardo have reunited after a messy public spat, and by the looks of it, are stronger than ever.

The celebrity couple had fans concerned after reports emerged that their relationship had turned physical after a public spat.

But the dancer and club hostess has insisted that all is well and has put reports of gender-based violence (GBV) strictly behind her.

According to City Press, Zodwa and Ricardo had a public spat last month after the latter demanded his girlfriend foot his Uber fare.

Ricardo was returning from a night out with his friends and had reportedly spent all his money on drinks, claims the publication. A fight then allegedly ensued after Zodwa refused and Ricardo threatened and insulted her.

City Press stated that Zodwa confirmed the incident, and even admitted to seeking help at the Douglasdale police station in Johannesburg

An unnamed police officer told the publication: “She came to the station asking police to help her as she was afraid that her boyfriend might physically harm her. So, the police went to her residential area and managed to calm the situation down”.

Zodwa herself lashed out after police leaked information to the press.

She said: “It shows that our cases are not safe with the police. I reported it because I don’t want to be a victim of gender-based violence. A lot of women fall victim to violence and it is about time for police to protect us.”

It’s not the first time Zodwa’s love life has made it into the tabloids. The mom-of-one broke up with Ntobeko Linda days before their wedding was set to take place. And her relationship with Vusi Buthelezi ended after she accused him of scamming her out of a luxury car endorsement.

ZODWA AND RICARDO LOVED UP

On Monday, 28 February, Zodwa shared an Instagram post revealing that she and Ricardo had kissed and made up

The picture saw her dancing during a performance in a black g-string and mesh dress. In the background, Ricardo stared at adoringly from the sidelines.

She tagged Ricardo in the picture with a red heart emoji. Ricardo commented on the picture: “Jy is my alles my liefie [you are my everything, my love]”.