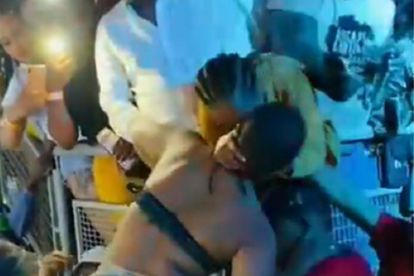 Zodwa Wabantu was forcefully kissed by female fan during her performance on stage over the weekend.
Image via Instagram
@zodwalibram

Zodwa Wabantu was forcefully kissed by female fan during her performance on stage over the weekend.
Image via Instagram
@zodwalibram

The exotic dancer and entertainer – famous for her sexy onstage performances and barely-there wardrobe – was once again manhandled by a number of concert-goers in a clip that has since gone viral.

And one female fan even tried to forcefully kiss the star this time!

During a performance in the Eastern Cape over the weekend, Zodwa – who wore a black bra top, G-string and a short mesh skirt – was seen being manhandled by a number of male fans as she danced on stage.

In the clip posted on her Instagram account, security guards are seen desperately trying to ward off the hands of the concert-goers – who groped the star between her thighs and butt.

Also during the disturbing video, a woman is seen forcefully grabbing Zodwa’s face as she attempts to kiss her on the mouth.

But while Zodwa looked visibly uncomfortable during the ordeal, she laughed off the incident by captioning the clip: “There will be love & hate when you love people”.

While followers of Zodwa are by now accustomed to her raunchy videos, many have complained at finding videos of her being groped “triggering”.

A number of fans reacted in disgust and horror in the comment section to the clip:

“The way they shove their hands up your skirt is so cringey and triggering.”

“I just don’t like how they all want to touch her That’s sexual harassment at its best. We all know that Zodwa loves people and is very down to earth, but I personally feel that they’re crossing the line.”

“The crowd is getting out of control with all that touching you unnecessarily.”