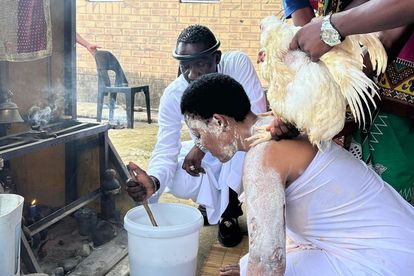 Zodwa Wabantu has shared all avenues of her life with her fans; from her relationships with Ben 10’s to her single mom struggles to her side hustles…

She’s even invited fans into behind the scenes of her busy life through her Moja Love reality show Uncensored.

Now Zodwa is navigating a new chapter of her life – becoming a “Inkosazana ya Manzi”. The dancer and club host has given fans a glimpse of her embracing her spiritual journey and what it entails for her future.

But for some fans, some things are better kept private and out of the spotlight.

Zodwa posted a picture of a traditional ceremony on her Instagram on Tuesday, 8 February. She captioned it: “Camagu”, which means “I promise”.

In the pic, Zodwa is seen undertaking a ceremony, which include a live chicken, a broth and burning herbs.

But whilst Zodwa is usually praised for her no-nonsense attitude, many were not impressed or approved of her posting such on her social media account.

Taking to the comments section, a number of followers expressed their opinion.

“Social media is slowly destroying the beauty of African tradition, how sacred it should be.

“Let’s respect spiritual things. Some things should be private”.

“This shouldn’t be exposed, it’s sacred…Nothing is sacred anymore”

“As a spiritual child myself, I don’t even post pictures of my ndumba or anything related to that. Yes I have a calling, but not to flaunt it on social media, ai. I feel like such rituals are suppose to be private”

“I personally believe that such things need to be sacred and private if it is a true calling. Once they start showing off…I just know ukuthi is no longer a calling but a cult”

Meanwhile, Zodwa has expressed her desire to join the Big Brother Mzansi house for two weeks as a guest.

The provocative dancer reacted to a scene from housemates who claimed they would love for the star to entertain them. And Zodwa thinks it is a good idea, tagging Big Brother Mzansi production to make their wish come true.

She wrote on Instagram: “The roommates want Zodwa Wabantu @bigbromzansi I need to be in that house for a two week visit. South Africans make it possible @bigbromzansi @bigbromzansi”.