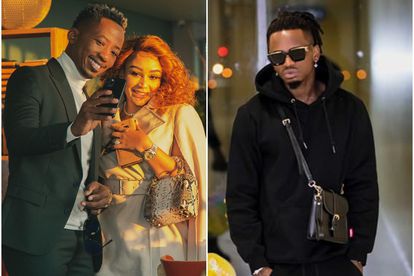 If you’ve been watching the Netflix series Young, Famous & African, you would know that it is one drama-fest filled with love triangles. And the biggest one involves Diamond Platnumz, his baby mama Zari Hassan and their mutual friend Andile Ncube …

The Tanzanian singer and the SA sports presenter have been engaged in a tense stand-off after they both expressed interest in the same women.

In fact, season one ends on a cliffhanger after Andile decides to personally break the news that he is interested in Zari to Diamond Platnumz himself.

Following the release of the series last week, many of the cast members have teased details of the show, and what has happened thereafter on their social media accounts.

On Monday, 21 March, Andile posted a picture of him embracing Zari Hassan on his Instagram account. He popped in the hashtag “#ShestheBoss” in the caption.

But the post attracted plenty of shady comments from Andile’s closest friends – including his love rival Diamond Platnumz.

But the most shadiest comment came from Diamond Platnumz himself who shared his thoughts of how he really felt. In a since-deleted Instagram comment under the post, he wrote: “You snitched on me Andile. Out of all my friends”.

Diamond’s comments come after the finale closed with him reacting to Andile’s confession by saying: “But that’s my family man”.

Despite Andile’s nearest and dearest expressing their concern at his love interest in Zari Hassan, many fans are shipping the new prospective couple.

And they think Zari is better off with “respectful” Andile than “player” ex and baby daddy Diamond Platnumz.