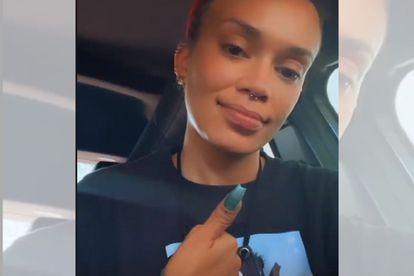 While many choose to keep their vote a secret, others are more forthcoming and have taken to social media to disclose their choice…

Among these were a number of South African celebrities who’ve proudly backed various political parties.

Many celebrities have taken to Twitter to reveal who they voted for at the local government elections that took place on Monday 1 November.

He tweeted: “I’m happy for Action SA when people have got nothing to say they will always find even the lousiest negative nonsense to say about you. I’m for Herman Mashaba.”

And it was no secret whom “freedom fighter” stars like Ntando Duma, Babalwa Mneno or Ringo Madlingozi voted for…

And DJ Shimza showed his allegiance to the ruling party…

But while Pearl Thusi did not reveal who exactly she voted for, she did make it clear that it was neither the ANC nor the DA.

A number of celebs also hailed how effortless the voting process was.

Actress Terry Pheto revealed that prior to voting, she had to get her temporary ID, which “only took 30 minutes”.

And Siv claimed that he was done in 3 minutes flat!