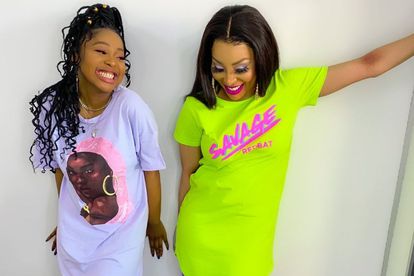 A video shared by Lasizwe on social media has convinced tweeps that Khanyi Mbau’s daughter Khanukani is pregnant.

Lasizwe shared a video of the entire family posing for a photo during their recent weekend getaway.

Tweeps suspected Khanyi Mbau’s daughter Khanukani is pregnant in the video because she seemed uneasy.

She appears to have gained weight in the video and is hiding her belly with her long shirt.

Not too long ago, Khanyi took to her Instagram to share how she and her family had taken the time to celebrate her father’s heavenly birthday.

It has now been one year since they lost their father and friends, fans, and fellow industry mates took their time to send their love and strength to the family.

KHANUKANI MBAU: TOO YOUNG TO BE PREGNANT

Fans of Khanyi Mbau have defended her daughter and said that she has gained weight and that she was just being self-conscious.

Others state that she probably had too much to eat that day and hence that is why her tummy is bigger than usual.

They have also stated that it’s normal for teenagers to be insecure about their bodies and that she’s too young to be pregnant.

Tweeps can’t imagine Khanyi Mbau becoming a grandmother and her daughter being pregnant at 14 years.

YouTuber Lasiwe Dambuza recently took to his social media account to warn his fans about the dangers of an e-hailing app called Bolt (formerly Taxify).

He even advised his followers to delete the app altogether! This, after an industry colleague, was brutally beaten after requesting a ride on the service.