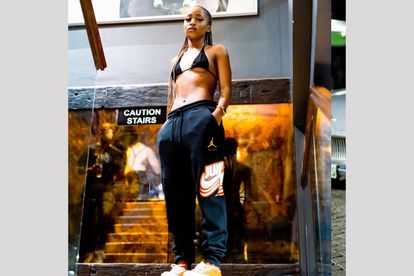 Swaziland DJ Lungelihle Zwane, popularly known as Uncle Waffles has been the talk of the Twitter streets for a few weeks now. However, Tweeps seem to think her success is linked to her beauty.

HOW UNCLE WAFFLES SHOT TO FAME

Uncle Waffles grabbed the attention of Tweeps after she shared a video playing a set. Her smooth dance moves had Tweeps playing the video on repeat. The video has been watched four million times.

Her viral video also caught the attention of Canadian rapper Drake who then followed her on Instagram.

Uncle Waffles quickly became an internet sensation. However, the conversation quickly deviated from her mixing skills to her beauty. Tweeps claimed that the 21-year-old is only successful because of pretty privilege.

The principle of pretty privilege is that those that are deemed attractive have an upper hand at life. A similar occurrence happened to South African actress and DJ Thuli Phongolo. Tweeps thought she was using her “pretty privilege” to work her magic on DJ Maphorisa to get a kickstart in her DJ career. Tweeps also believed that DJ Maphorisa did not deserve Thuli because he is dark skin and she is light skin, sparking a conversation of colourism on Twitter.

TWEEPS: ‘IS SHE FAMOUS FOR BEING SEXY?’

The Twitter streets were divided on whether Uncle Waffles is successful because of pretty privilege.

“The men have been playing the same afrobeats sets for a decade but now Uncle Waffles who just learned how to DJ in the pandemic is the problem. What did I miss? I thought everybody loved pretty privilege, what happened??” wrote @_Daveybaby.

“Is uncle waffles famous for actually being a good DJ or is she famous for being sexy? Pretty privilege does exist; most SA female celebrities are not famous because they are actually good DJs, good actors or presenters they are famous because of their looks many are untalented,” wrote @Khalid_Muhamadi.

While other Tweeps stepped in to defend the DJ.

“Not me listening to the radio about uncle waffles and this “pretty privilege” shandis, me I’m telling you now she’s pretty yes but she’s also god damn talented,” wrote @vuyisile_kheswa.

Another Tweep mentioned South African singer Makhadzi who was slammed on Twitter for not being as “beautiful” as other women.

“Makhadzi  because she wasn’t ‘pretty enough’. Uncle Waffles because she’s ‘too pretty’. I’m beginning to suspect the issue isn’t about looks but it’s about women making it in the entertainment industry,” wrote @spartji.

IS IT PRETTY PRIVILEGE?

Author and director Janet Mock explained that pretty is a privilege and pretty is often linked to certain physical attributes.

“Being pretty is a privilege, but we refuse to acknowledge it,” said Mock to Allure Magazine.

“Pretty is most often synonymous with being thin, white, able-bodied, and cis, and the closer you are to those ideals, the more often you will be labeled pretty — and benefit from that prettiness,” she continued.

The reason Drake followed Uncle Waffles is a question we can only assume the answer to. However, pretty privilege is very-much a thing but so is talent. Therefore, there are multiple dimensions to success.