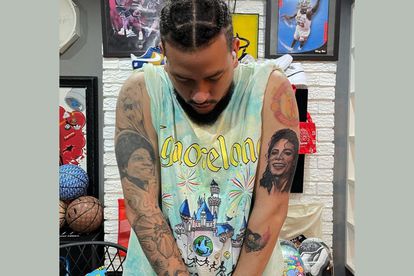 AKA gets another tattoo of Michael Jackson. Image via Instagram @akaworldwide.

AKA gets another tattoo of Michael Jackson. Image via Instagram @akaworldwide.

South African rapper Kiernan Jarryd Forbes, popularly known by his stage name AKA, debuted his latest tattoo of Michael Jackson on Tuesday 30 November but Tweeps are not impressed.

AKA shocked social media users when he announced he got another tattoo of Michael Jackson. Yes, he now has two tattoos of the iconic pop singer on his arms. AKA has a growing tattoo sleeve and his new Michael Jackson tattoo sits just below his Manchester United, red and yellow tattoo. Take a look..

“Original MJ & my favourite MJ Sparkles … a lot can happen in a lifetime,” he tweeted.

The Fela In Versace hitmaker also has his daughter Kairo Forbes name tattooed on his body along with a lion and the word “legendary.”

ALSO READ: ‘It feels like it’s my baby’: AKA on DJ Zinhle and Murdah’s child

Tweeps did not seem to like AKA’s new addition to his inked body. One of his followers suggested he tattoo a picture of former president Jacob Zuma.

“Why not tattoo a pic of Jacob Zuma? since you were always tweeting lead us Msholozi Lead us,” wrote @BoringJokesSA.

“There are better things to tattoo on your body,” wrote @deebzo.

After one of AKA’s followers said he would not tattoo former President and freedom fighter Nelson Mandela, another clapped back. The Tweep asked if he would rather tattoo a man accused of child abuse on his arm… like AKA did.

“A man accused of child abuse versus a man who spent 27 years in jail for fighting for human rights. I love MJ but damn,” wrote @Blcktyde.

“Been waiting for this one long time. I can now have my Icon & role model both in one piece, good thinking @akaworldwide,” wrote @JayOne49942455.

ALSO READ: AKA: ‘I was diagnosed with clinical depression’

Freak accident: Hunter shot dead by own dog during excursion

Pesto potato salad: A twist on a classic South African braai side