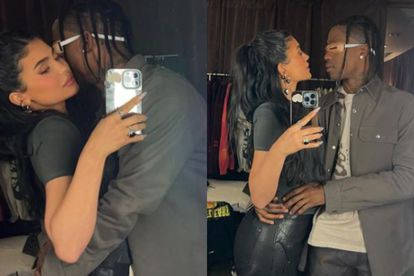 Yung Sweetro has left tongues wagging after she responded to Travis Scott claiming he has never been with her. According to The Mirror, it all started when Yung Sweetro shared a behind the scenes look of a set. Some noticed that Travis was visible in the background.

So, many thought the Sicko Mode hitmaker was cheating on his “baby mama” Kylie Jenner with Yung Sweetro. Travis and Kylie had an on-and-off relationship since they began dating in 2017. The pair have two children together – Stormi, who was born in 2018 and a son who was born in February this year.

Travis took to his Instagram Story on Saturday 20 October to deny cheating on Kylie. He also claimed that he has never been with this person.

ALSO READ: ‘You cheat on the B* every night’: Travis’s ‘side chick’ claps back

YUNG SWEETRO CLAPS BACK AT THE RAPPER

However, Yung Sweetro did not take this lying down. She fired back at the rapper claiming she saw him on Valentine’s Day and he’s “definitely been with her” – via a video on her private Instagram account which was shared by The Shade Room.

“Okay so what we are not going to do is run off on a lie on me because I’ve been good. I posted whatever story you guys wanted me to… but saying that you don’t know me and that you’ve never been with me when you’ve definitely been with me,” she said.

“Come on, even this Valentine’s Day I saw you…. Are we pretending that didn’t happen too? Come on. You cheat on the b**** every night, the whole f***ing city sees it,” she continued.

Travis then clapped back by sharing a photo of a table from Valentine’s Day with the caption “if you wasn’t at this table on V Day then you wasn’t with me”.

Twitter users were shocked that Travis allegedly cheated on Kylie and thought that no one was safe. Take a look…

Others slammed the pair for the way they defined their relationship.

ALSO READ: ‘You are lying’: Kanye West claps back at Khloé Kardashian