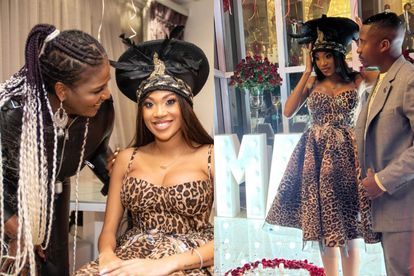 Andile Mpisane shocked Mzansi when he announced that he is engaged to model Tamia Louw. True Love later revealed that Andile and Tamia are actually married. This was a huge surprise because the It’s Too Much Sauce hitmaker was believed to be in a relationship with the mother of his two daughters – Sithelo Shozi.

The Royal AM chairperson gifted his “baby mama” a luxury car in November so Tweeps did not expect the 20-year-old to introduce a new wife. Sithelo herself had Tweeps thinking she was “Mrs Mpisane” in September.

So, Tweeps seemed to think the marriage was arranged.

MaMkhize released a personal statement saying that she would never choose for her son.

“As a mother it is my job to guide and support my son’s decisions. And I would like it to known that I will never choose for him. I’ve lived my life and learnt my lessons! I will never take away the opportunity for him to live his own life and learn his lessons along the way,” she wrote on Instagram.

Despite the statement, Tweeps were still convinced the marriage was arranged because Andile did not seem to be happy.

TWEEPS: ‘HE WAS FORCED’

Twitter users thought Andile was forced into the marriage and that he still loves Sithelo.

“Clearly this wedding of Andile Mpisane’s was an arranged marriage. Stop saying Andile is trash, we all can clearly see he was forced. He will continue and date Sithelo futhy! And even if he doesn’t he was forced to this marriage,” wrote @BRIEE14790624.

“I really feel like #Mamkhize forced Andile Mpisane to get married to Tamia. In every picture/video boy looks uninterested, the mom is way more excited than he is,” wrote @KeMapula.

“#MaMkhize this abuse on Andile Mpisane too much for a young man he’s always looks like he wanna finish n go to bed. Mom is using him too much,” wrote @CivicTy07196060.

“This Andile Mpisane and Sithelo thing is WILD! Now Tamia has to sleep with one eye open because Mamkhize could wake Andile up at 2 in the morning to get dressed to go marry another woman soon,” wrote @RealLwaziMsomi.

While MaMkhize denied that the marriage was arranged, this begs the question – How long did Andile know Tamia before getting married?