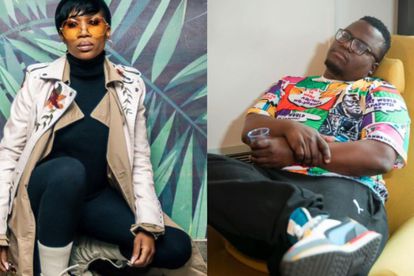 Dineo Ranak was dragged on Twitter after a Tweep who goes by the handle @tumeloditle shared a video of her and Sol Phenduka on their Kaya FM radio show. Sol seemingly had to raise his hand to speak while on their show. Take a look…

Sol broke his silence on the drama on an episode of Nkululeko n Cultr podcast on Monday 15 August. The podcast host compared the situation to being on Podcast and Chill with MacG. He said that his role is just as important but MacG is the main anchor.

He also noted there is less time on radio than there is on a podcast.

“On air, you probably most times hear Dineo’s voice last before going into a sports break or my voice if I say something and we feel like the link is complete. She is the main anchor and I am the co-anchor,” he said.

This comes after Kaya FM defended the reality star. The managing director said that she was the main anchor.

“The structure of 959 Breakfast is that Dineo Ranaka is the main anchor and Sol Phenduka is the co-host and traffic reporter,” Kaya’s managing director, Sibondile Mtyali said in a statement.

“We are aware that a female lead anchor on a breakfast show is unusual in the SA radio landscape, but we have full confidence in both Dineo and Sol’s talent and their ability to navigate the dynamics of the show,” Mtyali continued.

Twitter users dragged Dineo for being a “bully” after Sol’s interview. Take a look…

“As men we should appreciate how Sizwe Dhlomo stood up for himself against being bullied by Unathi. Something Sol should learn. Once a woman bully you once and you allow it…. They’ll bully you forever,” wrote @ChrisExcel102.

“Dineo Ranaka must stop portraying a treatment to us as if Sol Phenduka is part of the audience or her subordinate. He’s the co-host of the show, not a commentator,” wrote @Ori_RSA.

Others thought Sol looks like he is not prepared for interviews.

“But Sol Phenduka always looks like he’s not prepared for interviews. Sometimes Dineo pauses for Sol to come in but he just keeps quiet. Let’s stop hating on Dineo, she’s doing what she’s supposed to do as the main host,” wrote @NombuleloPS.