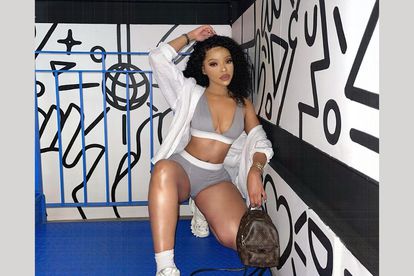 Tweeps have been dragging reality star Faith Nketsi on Twitter today (6 December) for allegedly cheating on her partner.

FAITH NKETSI ACCUSED OF CHEATING ON HER BOYFRIEND

Faith Nketsi topped the Twitter trends list because people believed she cheated on her partner. Instagram page The Popcorn Room shared “receipts” of Faith allegedly being spotted with another man at Sumo Nightclub in Johannesburg.

The Popcorn Room has since stated that the reality star and her partner are still very much together.

“With regards to tea, I can confirm that Faith and Nzuzo are still very much together. She did not cheat on him y’all. In fact they were at club Sumo that evening, just at different sections,” read the Instagram Story.

However, this did not stop Tweeps from dragging Faith on Twitter.

TWEEPS: ‘DUDE SPENT R2 MILLION ON HER AND SHE STILL CHEATED’

Twitter users were outraged at Faith’s cheating allegations because her partner bought her a Range Rover.

“If dude spent R2 million on her (New Range Rover price tag) and she still cheated on him, who are we that buy data or flowers 🙈🙈🙈🤣,” wrote @tido_magnifcent.

“Faith Nketsi cheating on that man is not a victory for women. Men still be leaving women who they have children with. People who cheat on their partners are damaged. We should not be celebrating toxic behaviour,” wrote @blaqdayimane.

“When men are told to just keep it simple and occasional when buying women presents, simps never fail to embarrass themselves. Faith Nketsi’s boyfriend bought her a Range Rover, rumor now has it that she’s rolling with a white man in it and even denies having a boyfriend at all,” wrote @Cyfogetsi.

“Many tweets on the Faith Nketsi Range Rover story reveals that we have a serious societal problem of people thinking ‘buying things’ for your partner should secure you ‘love and loyalty’. She cheated-that’s wrong, yes  but why is the car linked ? Was it meant to secure something?” wrote @Prelukhell.

ALSO READ: How many flames does Faith Nketsi get for this fiery jumpsuit? [photos]