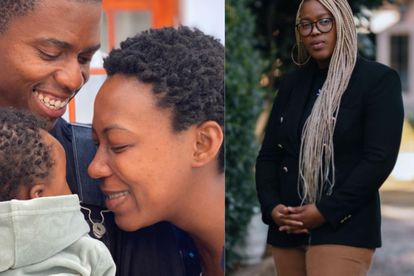 Tweeps defend Msaki after she was accused of having an affair with Rami Chuene’s daughter’s husband Smash Afrika. Images via Instagram @kayfeelow @msaki_za.

Tweeps defend Msaki after she was accused of having an affair with Rami Chuene’s daughter’s husband Smash Afrika. Images via Instagram @kayfeelow @msaki_za.

Sunday World reported that DJ Smash Afrika allegedly had an affair on his estranged wife – Rami Chuene’s daughter, Kefiloe – with singer Msaki. Rumours of an affair was sparked after Kefiloe reportedly found a picture of Smash Afrika giving the singer a kiss.

Kefiloe also allegedly found love letters from Msaki to Smash Afrika confessing her undying love for him. She is said to have suffered emotional abuse at the hands of her estranged husband who reportedly labelled her a “gold digger”.

Smash Afrika also allegedly claimed that Refiloe’s “crooked” family “conned” him into marrying her against his will.

Kefiloe reportedly went to Smash Afrika’s apartment to take her household items and baby’s clothes. Smash Afrika allegedly tried to stop her. So, she allegedly took drinking glasses and threw them on the floor.

The source claims that she did not break any appliances because he only had a kettle and a laptop.

“She did not break any appliances in that house because the only thing Smash Afrika has in the house is a kettle and a laptop,” the source continued.

Twitter users are defending Msaki despite the allegations of an affair. Take a look…

“We all agree right smash afrika is the problem not Msaki,” wrote @noah_mbatha.

“Yey.. Msaki is not a home wrecker she only wrote love letters

“I don’t blame Smash Afrika , Msaki does look like the type to bring peace into someone’s life,” wrote @Malwande_udumo.

“Never thought I’d read about Smash Afrika, Kefiloe Chuene and Msaki in the same article and it involving an entanglement,” wrote @LavidaOnline.