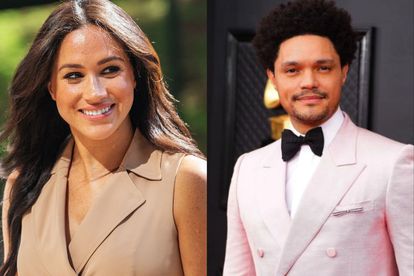 South African-born comedian Trevor Noah opened up about his mother Patricia Noah being shot at the hands of his stepfather on the latest episode of Meghan Markle’s podcast Archetypes which released on Tuesday 29 November.

The latest episode of Archetypes is titled Man-ifesting A Cultural Shift with Trevor Noah, Andy Cohen and Judd Apatow.

TREVOR NOAH OPENS UP ABOUT THE SHOOTING OF HIS MOM

Comedian Trevor Noah opened up about the shooting of his mom – Patricia Noah by his stepfather, mechanic Abel Shingange. The comedian said that all he felt was “rage” in the wake of the horrifying incident.

According to Meghan, Trevor said that his mom told him not to hate his then-step father for shooting her. But he should pity him for also being a victim in his own way, relating to masculinity.

LESSONS OF BEING A MAN AND MASCULINITY

Trevor said that his mom taught him that being a man has nothing to do with making more money, but it’s how you fulfil your role.

He went on to say that he and his mom relied on each other and suddenly he was the man of the house.

“I remember my mom saying to me when I was very young, she said, remember you can be the head of your household as a man without owning a cent more than your woman said you can earn nothing,” he said.

“She said being a man has nothing to do with with how you wield your power in the household. It’s just how you fulfill your role,” he continued.