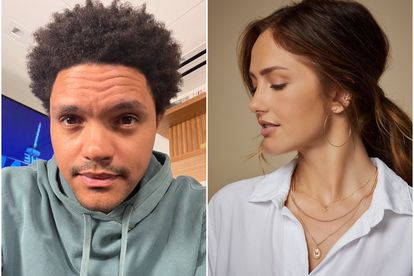 Trevor Noah and Minka Kelly have been spotted on date – have they rekindled their romance?
Images via Twitter
@trevornoah
@minkakelly

Trevor Noah and Minka Kelly have been spotted on date – have they rekindled their romance?
Images via Twitter
@trevornoah
@minkakelly

Trevor Noah may be one of the world’s most eligible bachelors, but that may soon change…

The South African comedian has been spotted with his ex-girlfriend Minka Kelly, fuelling rumours the on/off couple have finally rekindled their relationship.

Trevor Noah and Minka Kelly go for a dog walk

The Daily Show host was spotted out in public with the model and actress where they were seen taking her dog for a walk.

The former couple attempted to blend into the crowd – Trevor was pictured sporting a white T-shirt and cargo pants while Minka donned a beige jersey and slacks.

The stand-up star was also seen taking the lead and even smiled at laughed at his lady love.

Trevor Noah and Minka Kelly are reported to have called it quits in May, however have been spotted together on a number of occasions since then.

The lovebirds – who were first linked in August 2020 – were even photographed on a romantic getaway to St Barts not long after their split, where they were spotted “kissing” and “cuddling”.

According to People magazine, the couple are “not officially back together,” but are “figuring things out.”

While Trevor Noah remains mum on his love life, he continues to speak openly about issues affecting American citizens: racism, police brutality, women’s rights and of course, politics have been big talking points for the Johannesburg-born star.

But whilst the Grammy presenter has often deliberated over concerns affecting his adoptive country, it was his lack of comments on the July unrest and violent lootings in South Africa that irked many back home.

Trevor’s comments on Andrew Cuomo – The New York Governor accused of sexual misconduct against both men and women – have also gone down in flames.

Trevor is currently on a hiatus from The Daily Show, where he is expected to resume filming later this month.