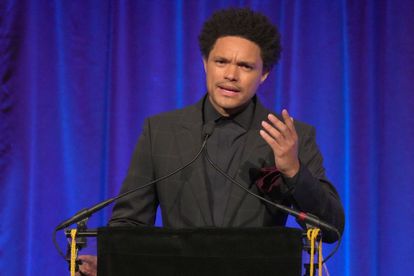 Trevor Noah has told fans not to cancel Kanye West.
Image via Kevin Mazur/Getty Images for National Board of Review

Trevor Noah has told fans not to cancel Kanye West.
Image via Kevin Mazur/Getty Images for National Board of Review

The Daily Show Host Trevor Noah has responded to the latest news surrounding Kanye West: The banning of the superstar rapper’s performance at the 64th Grammy Awards ceremony on 3 April at the MGM Grand Garden Arena, in Las Vegas.

The Donda hitmaker has been barred from music’s biggest awards show due to his “concerning online behaviour”, claim sources.

This follows a series of threatening Instagram posts from Kanye, including the muso hurling racial slurs at The Daily Show host. Kanye has also taken aim at his estranged wife, Kim Kardashian, and her new lover, Pete Davidson.

Taking to Twitter, the South African-born comedian called on the public not to cancel Kanye West amid his personal life struggles.

“I said counsel Kanye, not cancel Kanye”, he tweeted.

This follows an episode of The Daily Show last week, in which Trevor Noah accused Kanye of “harassing” Kim. He even compared the scenario to his own childhood in which his mother Patricia suffered domestic abuse at the hands of his step-dad.

But tweeps have had mixed responses to Trevor’s sentiments, given Kanye’s track record.

Some disagreed, claiming that Kanye should be held “accountable” for his actions

“It’s not cancelling Kanye, it’s consequences for his own actions. Once he feels more consequences maybe he’ll be open to counselling. For the safety of all, I hope so. Until then, let others see that this behavior does have consequences even when you’re as big as Kanye”

“Many times it takes cancelling for someone to accept counselling”

“Sometimes you have to pushed to a low before you can heal. Maybe if he sees what he’s doing is wrong and that people do things he needs help then he will get them help. Just maybe”.

Others claimed that the public needs to cut Kanye some slack as he is dealing with a messy divorce and custody battle as well as mental health issues.

“People need to understand that grieving a loss in a person who has mental illness isn’t the same dynamic for someone without mental illness. A form of psychosis occurs. It’s a trigger. Publicly falling apart is a way of acting out & indirectly asking for help”

“Kanye definitely needs an intervention not to be cancelled. You don’t write people off when they are not mentally ok.

“It’s amazing to me that in this age of reduce, reuse, and recycle, we are all so quick to throw away a human being. Life is tough for everyone, we all need a little help sometimes”

“Have you ever gone through a divorce with children? It’s brutal. A little compassion for the man is in order”