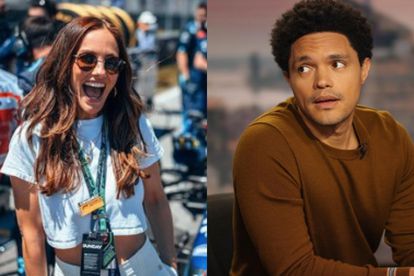 South African-born comedian Trevor Noah’s ex-girlfriend, actress Minka Kelly has been spotted out for the first time since their split at the F1 in Canada on Sunday 19 June.

Trevor Noah’s ex-girlfriend, Minka Kelly was spotted supporting Williams Racing at the Formula 1 Canadian Grand Prix on Sunday 19 June. This marks her first public outing since the rumours of her split from the Daily Show host emerged last month.

Page Six reports that Minka was overheard talking about how she and Trevor watch the sport together regularly when they were dating.

“She was freaking out when she went on the starting grid,” said the source.

The Euphoria star was seen posing with inside Williams driver Alex Albon’s car. This was before she was  treated to a three-course lunch by Michelin star chef, Niall Keating. She reportedly ate caviar, truffle gnocchi, and filet mignon served on Wedgewood china flown in from Europe for the event.

WHY DID THE PAIR CALL IT QUITS?

About a month ago, People reported that Trevor and Minka had called it quits after almost two years of dating. A source boldly told the publication that Minka would rather be single than “waste her time” on the wrong guy.

“Minka is single now. She is very happy, she’d rather be single than waste her time with the wrong guy,” said the source to the publication.

Another source claims the pair have been broken up for a while.

“They have been broken up for a while,” said another source to the publication.