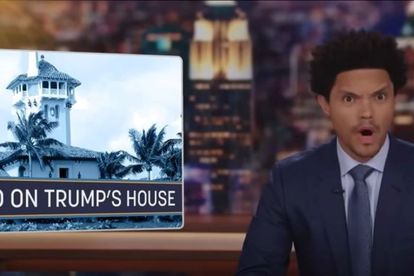 ‘The Daily Show’ host had a field day about the FBI search on former US president Donald Trump’s Palm Beach mansion on Monday 8 August. Image via YouTube screengrab/ The Daily Show

‘The Daily Show’ host had a field day about the FBI search on former US president Donald Trump’s Palm Beach mansion on Monday 8 August. Image via YouTube screengrab/ The Daily Show

Conspiracy, bribery or blackmail? Nooooooo…Trevor Noah has his own take on what could finally lead to the downfall of former United States (US) president Donald Trump.

The South African-born comedian and The Daily Show host could not resist poking fun at the unprecedented FBI raid on Trump’s Florida residence and private resort, Mar-a-Lago.

NY Times reported that the former president called the search an “assault”, adding “they even broke into my safe!”.

According to Huffpost, the US Justice Department is reportedly investigating whether Trump removed classified materials from the White House after his term ended.

Trump is also facing an assortment of other inquiries into his conduct, as well as criminal and civil investigations into his company’s business and tax dealings.

“Wouldn’t it be weird if this is the thing that takes Trump down?” Trevor Noah quipped on Tuesday’s The Daily Show.

“We thought it would be something like conspiracy or bribery or blackmail. But no — Trump got busted for taking work home with him.”

Of course, Trump’s never seize to amaze the world with his loaded statements and Noah was quick to pounce on the former president’s question: “What’s the difference between this and Watergate?”

“This is completely different from Watergate,” Noah said with an amused smile.

“For one thing, the guys breaking into Watergate didn’t need to clean old ketchup stains off the documents.”

The incident, of course, became fodder for Twitter users, with memes about the unknown contents of the former president’s safe flooding the social media platform. Take a look:

One of the memes clearly referred to the time that Trump served up a Big Mac buffet to the Clemson University’s football team at the White House in 2019.