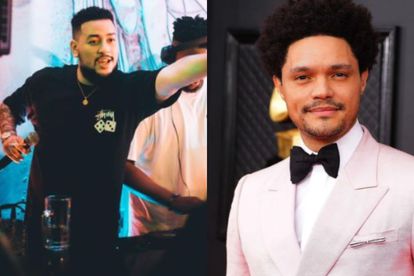 South African rapper Kiernan Jarryd Forbes, popularly known as AKA, has sparked a race debate on Twitter after his tweet about comedian Trevor Noah on Friday 12 August.

AKA, who is a fan of South African footballer and a first-team coach at Manchester United Benni McCarthy, posed a question to his 5.3 million Twitter followers. The rapper asked whether Benni is considered “black excellence” or not?

“Quick question…is Benni ‘Black Excellence’ or nah? … just need an update with regards to who takes the W here. Thanks,” he wrote.

A Tweep responded by asking the question: “What is coloured?”. The tweep then asked whether South African-born comedian and The Daily Show host Trevor Noah was coloured.

“I once saw on SABC news colored parents protesting against a black ( African) principal, they didn’t want a black principal in their school… it’s an interesting question: What is a colored? Is Trevor Noah colored ? Is Lucas Radebe colored? Lucas’s mother is colored,” wrote @bsibisi1.

AKA: ‘TREVOR IS NOT COLOURED IN A SOUTH AFRICAN SENSE’

AKA responded saying that he does not think Trevor is coloured in a South African sense, but admitted that he was confused.

Noah published No 1 New York Times bestseller, Born a Crime: Stories from a South African Childhood — his autobiographical take on being born under apartheid law — in 2016. In the book, The Daily Show host writes about his father, Robert Noah, who has Swiss-German ancestry, while his mom, Patricia Nombuyiselo Noah, is a Xhosa woman.

“Uhm no … Trevor is not Coloured in the South African sense … or is he? I dunno. I’m confused now,” AKA replied to the Tweep.

So, this sparked a debate on race on Twitter.

Twitter users were divided over the question of race and what makes someone coloured. Take a look…

“Proving yet again that the category is ultimately about the rejection of & alienation from organic aboriginal culture, not colour. It simply happens that a full alienation of indigenous culture is more LIKELY among Asian & mixed race for obvious reasons,” wrote @samued5r.

“This one is actually a pretty tight one. Trevor’s dad is white and his mom is black. Which makes him ‘coloured’ by skin tone innit?” wrote @LSGuniversal.

“Is it safe to say that coloreds are neither black nor white but just colored if that makes sense,” wrote @MesutNene.

ALSO READ: Trevor Noah and the ‘weird crime’ that could topple Trump… [watch]