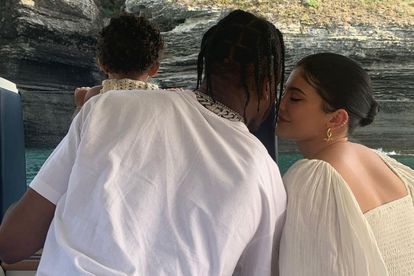 American rapper Jacques Bermon Webster II, popularly known as Travis Scott, has denied rumours that he cheated on his “baby mama” Kylie Jenner via an Instagram Story on Saturday 22 October.

Rapper Travis Scott topped the Twitter trends list as rumours that he cheated on his “baby mama” Kylie Jenner surfaced. Travis and Kylie began dating in 2017 but had an on-and-off relationship.

The pair have two children together, a daughter named Stormi who was born in 2018 and a son in February this year. According to The Mirror, the cheating rumours started when rapper Yung Sweetro shared a behind the scenes look behind a camera. Some noticed that Travis was visible in the background.

TWEEPS WEIGH IN ON TRAVIS AND KYLIE

So, many thought that the rapper was cheating on Kylie with Yung Sweetro. Take a look…

“The fact that Travis can cheat on Kylie Jenner proves to me that it does not matter how you look or how much money you have, men DO NOT give afff and will ALWAYS CHEAT!,” wrote @Suezy_Jay17.

“Kylie Jenner being cheated on is proof that no matter how good you are these men will still cheat 🤷🏼‍♀️ like this woman is a billionaire, she’s loyal, private, and honestly looks like a great mom to her kids. Men ain’t shit I’m telling you,” wrote @jeontiddies_97.

“Moral of the story: don’t be an idiot like Kylie Jenner and Travis Scott and pop out kids when y’all can’t even define your own relationship. Kids deserve a family not this gaslighting bullshit they call a ‘relationship’,” wrote @TashhSolo.

THE RAPPER RESPONDS TO CHEATING RUMOURS

Travis took to his Instagram Story on Saturday 20 October to explain his side of the story and deny cheating on Kylie.

ALSO READ: ‘I want cleavage like my sisters’: Khloé considers a boob job

SONA 2023: Ramaphosa must announce measures to save the sugar industry