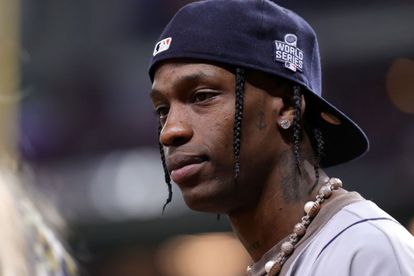 Travis Scott is the subject of a new rumour alleging he has not only left the USA, but has been banned from the country as well…

The rapper has been keeping a low profile since the Astroworld tragedy last month where 10 people died in a deadly concert crowd-surge.

Since then unfounded rumours of the star performing a satanic ritual at the music festival has also emerged.

A TikTok video, which has gone viral, claims the star was seen leaving the country after “getting banned”. The video also has the words “shocking footage” written across it and a sad tune plays in the background.

The TikTok clip has millions of views and tens of thousands of comments. Some of the comments include:

I dont feel bad for him, he knows exactly what was going on”

Thank you Lord for kicking this devil out of our country”

Where’s Kylie? Cant stand by her man when times are tough”

I feel bad for him 💔🥺 ##foryoupage ##fyp ##switchynews ##travisscott ##emotional

However the video has been debunked and has been proven to be that being footage from 2016. The clip has been credited to X17online, and the man behind the camera is heard asking Travis Scott if he would be voting for Hillary Clinton or Donald Trump in the 2016 elections.

Interestingly, Travis responded: “Kanye”, referring to his former brother-in-law Kanye West who at the time expressed interest in running for presidency in 2020.

Kanye – known known as Ye – later conceded his campaign on November 4, 2020, the morning after Election Day.

Meanwhile, Travis Scott was seen golfing at the Southern California in Palm Springs. The star made his first public appearance since the Astroworld festival earlier this month.

But despite his best efforts to unwind, Travis Scott is facing hefty legal woes in the form of mounting lawsuits against him.

Texas-based attorney Thomas J. Henry has filed a $2billion lawsuit against him on behalf of all of the Astroworld victims. And two security guards have also filed papers against their employer for “putting greed before safety”.

Where are the gaps? African digital innovators are turning plastic waste into value

Kaizer Chiefs: Amakhosi legend and TWO stars on their way out of Naturena