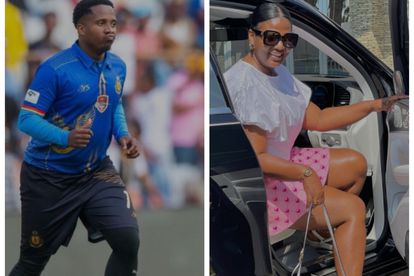 Shawn “MaMkhize” Mkhize shut down claims that she chooses the Royal AM squad following months of trolling endured by son Andile Mpisane.images via @andilempisane10, @kwa_mammkhize/Instagram

Shawn “MaMkhize” Mkhize shut down claims that she chooses the Royal AM squad following months of trolling endured by son Andile Mpisane.images via @andilempisane10, @kwa_mammkhize/Instagram

Millionaire and businesswoman Shawn “MaMkhize” Mkhize has come to her son Andile Mpisane’s defence following a plethora of trolling from tweeps.

This comes after tweeps made fun of the fact that Andile was benched during his season debut with Royal AM on 6 September at the Chatsworth Stadium against Richards Bay.

ALSO READ: ‘Feels good to be back’: Andile Mpisane brags about soccer career

Although he played this past Sunday, 25 September, when his team beat Kaizer Chiefs 4-2 during the penalty shootouts in Bloemfontein to clinch the Macufe Cup title, he still received negativity.

Speaking to sportscaster Andile Ncube on Metro FM’s Sports Night Amplified, MaMkhize defended her son from the heavy backlash. The wealthy entrepreneur told the radio host that Andile Mpisane is always at training like the rest of the Royal AM players and she has no part in choosing the squad.

“There is one thing people don’t know about Andile, as much as he is my son, he goes to training like every player. He trains with the team and Andile is the one who brought me into soccer because of his love for football. I used to cheer for him when he used to play at AmaZulu,” she told Andile Ncube.

ANDILE HITS BACK AT TROLLS

Tweeps have previously trolled Andile Mpisane for being a “jack of all trade”.

Besides being a soccer player, he is also a musician with his latest song Makhwapheni on almost 800 000 in three months.

The media personality is also a husband to Royal AM Ladies deputy chair Tamia Mpisane and together they have a daughter. In addition, he is a father to two other daughters he shares with DJ and influencer Sithelo Shozi.

With so much on his plate, and with him being the Royal AM chairman, the joke on social media has always been that he gets whatever he wants, including being included in the PSL club’s squad whenever MaMkhize chooses.

Hitting back at critics, Andile Mpisane took to Instagram following the match on Sunday to repost a message from a follower who said that money buys happiness.