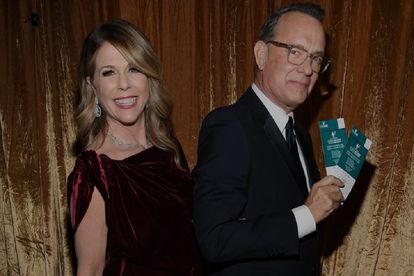 Actor Tom Hanks lost his cool this week when he shouted at a fan for almost tripping up his wife, Rita Wilson. Image via @bestmovie_mag/Instagram

Actor Tom Hanks lost his cool this week when he shouted at a fan for almost tripping up his wife, Rita Wilson. Image via @bestmovie_mag/Instagram

Just like Chris Rock knows to keep Will Smith’s wife’s name “the f**k out of his mouth,” a fan in New York will surely remember to “back the f**k off” when Tom Hank’s wife, Rita Wilson, approaches.

According to Fox News, the 65-year-old Hollywood actor quickly jumped to protect his wife after the couple was mobbed outside a restaurant in New York on Wednesday 15 June.

The publication reports that Hanks appeared stunned and visibly annoyed after a fan tripped his wife who almost fell to the floor.

Back the f**k off,” he shouted after the couple was mobbed outside a restaurant in Midtown. “Knocking over my wife?” he continued.

The incident happened as Hanks followed Wilson out of a sushi restaurant with a few security guards leading the way to their vehicle. As they walked, a group of fans quickly surrounded the couple, asking for autographs.

Fans of the You’ve Got Mail actor defended him on social media, the same way they did when a video of him trembling as he appeared to struggle to keep a steady hold on a microphone, went viral a few days ago.

According to Sky News Australia, a video of Hanks delivering a speech on stage at the Australian premiere of the new Elvis biopic has sparked concerns for his wellbeing.

The Forrest Gump actor gave a speech ahead of the screening on the Gold Coast earlier this month, and his hands appeared to shake as he held the microphone. Hanks – who stars as Elvis’ manager Tom Parker in the Baz Luhrmann-directed movie – is seen attempting to switch hands as he speaks on stage during the event o 4 June.

As per the New York Post, Hanks publicly revealed his diabetes diagnosis during an interview on the Late Show with David Letterman in 2013.

“I went to the doctor and he said, ‘You know those high blood sugar numbers you’ve been dealing with since you were 36?’ Well, you graduated! You’ve got Type 2 diabetes, young man.’ ”

The Mirror also reports that he told Radio Times that he is “lazy” and a “total idiot”.

“I’m part of the lazy American generation that has blindly kept dancing through the party and now finds ourselves with a malady,” he said.

“I was heavy. You’ve seen me in movies, you know what I looked like. I was a total idiot. I thought I could avoid it by removing the buns from my cheeseburgers.”