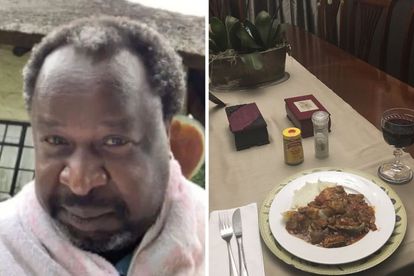 South Africa’s former Fiance Minister, Tito Mboweni has become somewhat of a food influencer on social media. Amid sharing updates of his new hairstyle or taking part in viral dance challenges, Tito’s endeavours in the kitchen have not gone unnoticed.

His overuse of pilchards and garlic, in particular, has opened him up to some ridicule in the past, but it seems that tweeps cannot get enough:

As of 8 October, Tito shared a new recipe of sorts – this time with the help of Tiger Brands and a hamper of KOO products (including their canned pilchards).

Tito shared updates throughout the cooking of the dish with his 1.1 million Twitter followers after making the pilchards in tomato sauce and baked beans the stars of the dish, according to IOL. He later also added “some extra special curry powder”:

After enjoying the dish, Tito thanked “the Tiger Brands CEO” and “KOO Pilchards” once more.

Usually, tweeps are very interested in his cooking skills, but it seems this time they decided to inspect everything else on each photo – like possible new furniture:

“I’m here trying to figure out whose house this is, as I haven’t seen that furniture before. I think even the stove is new,” said Mpono Mosaase. “Yo bought new furniture?” said Moea Makhakhe.

Some are wondering about the decorative pieces on his dining table:

“Are those human ashes in those small coffins on your table,” said Cha.

Others are curious about the presentation:

It is reported that not much is known about his personal life. He grew up in Tzaneen in Limpopo and is a father to three. And so, Tito, who is also believed to be a senior bachelor, was also questioned on why he is always eating alone: