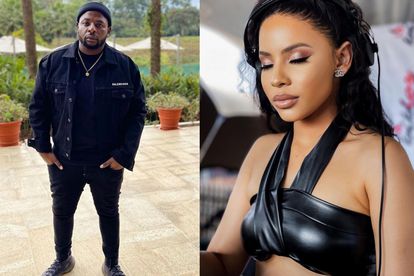 Whilst discussing the romance rumours of actress Thuli Phongolo and DJ Maphorisa, Tweeps got into a heated conversation surrounding colourism in South Africa.

HOW DEEP IS COLOURISM IN SA?

After a video of Thuli Phongolo and DJ Maphorisa getting cozy at a gig went viral, the actress began to trend on Twitter. This led to more videos of the pair being shared. In one of the videos Thuli is seen twerking on the DJ which further fuelled romance rumours.

Following the viral videos, Tweeps got into a conversation about whether they think the pair are dating or not. The conversation quickly spiraled out of control as some Tweeps were angry at the colourist remarks other Tweeps made about DJ Maphorisa. The Twitter users implied that the Lorch hitmaker did not deserve thuli because she is light skin and he is not.

It seems most tweets about Maphorisa’s skin colour have been deleted since others stood up for him.

While another Tweep seemingly attempted to defend the DJ, she said that “he’s not ugly he’s just dark skinned,” which further fuels the conversation surrounding colourism.

TWEEPS STAND UP AGAINST THE COLOURISM

While certain Tweeps were slamming the Midnight Starring hitmaker, others were less tolerant of the colourism.

Another Tweep said that this was the same thing that was said about Dr Musa Mthombeni when he revealed he was engaged to former Miss South Africa Liesl Laurie.

These are not the first romance rumours made against the actress so she knew exactly how to handle it. She took to twitter in a series of tweets to slam the rumours and confirm that she is single.

However, celebrities often deny relationships at the beginning! Just like Orlando Pirates player Thembinkosi Lorch did with actress Natasha Thahane in the beginning! Here’s another viral clip of Thuli and DJ Maphorisa for you to decided whether they are romantically linked… or not.