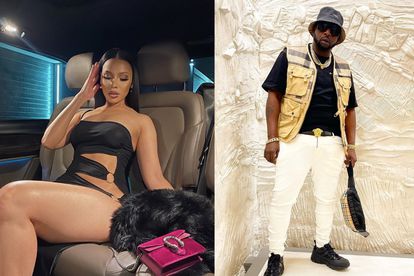 Actress and DJ Thuli Phongolo and DJ Maphorisa played a DJ gig together at Jojo Rooftop Lounge at Maboneng Lifestyle Centre in Johannesburg on Thursday 21 October and Tweeps think this was her plan all along.

Thuli Phongolo and DJ Maphorisa sparked romance rumours after a video of them sharing an intimate moment went viral on Tuesday 12 October. It was not long before other videos of the pair were shared on Twitter which saw Thuli twerking on the DJ at a gig.

The “Twitter Police” were determined to get the pair to confess their love, like they did with Orlando Pirates player Thembinkosi Lorch and actress Natasha Thahane. However, Thuli shut down the rumours saying they are not dating and she is still single.

Following Thuli denying the rumours, Tweeps began to speculate what her intentions were for “flirting” with DJ Maphorisa — a man with “serious money” as he says. At first, Tweeps thought the Lorch hitmaker did not deserve the “light skin beauty” because of his darker skin tone. This sparked a conversation of colourism on Twitter.

Thereafter, Tweeps began to speculate that the former Generations star was “using” the DJ for his money and to get ahead in her career.

Thuli is a hard working woman who is fully booked with DJ gigs this weekend. She played a set along with the Midnight Starring hitmaker at Jojo Rooftop Lounge in Johannesburg on Thursday 21 October. Taking to Twitter, she said that she was nervous and then quoted Vice President of the US Kamala Harris when she told US President Joe Bidden they won the election – “we did it Joe”.

“We did it Joe!!! I was so nervous to play with Phori but ke!,” she wrote on Twitter.

However, Tweeps think the gig was “supplied” by DJ Maphorisa.

Others thought they were the South African Beyonce and Jay Z.