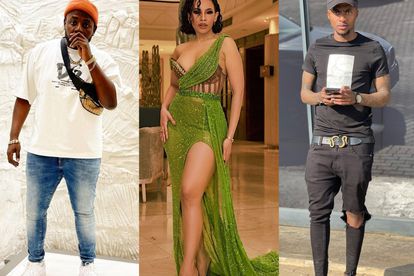 Orlando Pirates player Thembinkosi Lorch has many Tweeps believing actress and DJ Thuli Phongolo and DJ Maphorisa are dating after his comment on an Instagram Live, which was shared to Twitter on Tuesday 12 October.

RUMOURS OF ROMANCE BETWEEN THULI AND DJ MAPHORISA

Thuli Phongolo topped the Twitter trends list on Tuesday 12 October after Tweeps were convinced that there is something going on between her and DJ Maphorisa.

This was after a video of the pair getting cozy at what seems to be a gig, went viral. In the clip, Thuli and Maphorisa were holding each other tightly, holding hands and then walking off together!

In another video, Thuli is seen twerking on the Lorch hitmaker.

The “Twitter Police” were also quick to notice that two separate selfies of the pair were taken in the same place.

Another Tweep found a comment left by DJ Maphroisa on the actress’s photo.

ALSO READ: Who is Thuli Phongolo dating? FIVE of her rumoured baes [photos]

DID LORCH CONFIRM THE ROMANCE?

If those clues were not enough, Thembinkosi Lorch made a remark on an Instagram Live with DJ Maphorisa that left Tweeps thinking he confirmed the romance!

Although tweeps were convinced that the pair were romantically linked after the remark, Thuli was not having it! She took to Twitter to (yet again) clear up the rumours surrounding her love life.

She went on to clarify that she is single.

This is not the first time the actress was romantically linked to someone in the entertainment industry. In August, Tweeps were convinced she was dating Jerusalema hitmaker Master KG.