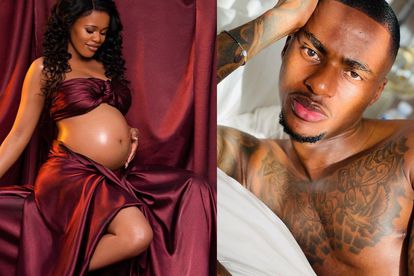 Actress Natasha Thahane announced her pregnancy on Tuesday 8 March and fans are convinced her on and off boyfriend, Orlando Pirates player Thembinkosi Lorch is the father.

Natasha Thahane announced that she is pregnant with a beautiful pregnancy shoot on 8 March. The Blood & Water star has been romantically linked to Orlando Pirates player Thembinkosi Lorch. So, Tweeps are convinced he is the “baby daddy”.

So, what do we know about Lorch’s potential “baby mama” Natasha?

1. SHE IS AN ACTRESS

Natasha shot to fame when she starred in SABC’s Skeem Saam. She went on to work alongside Connie and Shona Ferguson in The Queen on Mzansi Magic and she starred as Wendy Dlamini in Netflix’s Blood & Water.

3. SHE IS THE GRANDDAUGHTER OF ARCHBISHOP DESMOND TUTU

Natasha is the granddaughter of Archbishop Desmond Tutu. She was born to parents Trevor Thamsanqa Tutu and Nomaswazi Mamakoko.

The actress studied accounting at the University of Witwatersrand (Wits) but did not complete her qualification because she was more passionate about acting. She thereafter went on to study at the New York Film Academy in the US.

5. SHE HAS BEEN TRENDING FOR HER R1 MILLION SCHOLARSHIP SCANDAL

The actress caused an uproar on social media when she told MacG and Sol Phenduka that former speaker of the National Assembly Baleka Mbete assisted her with R1 million funding to study in the US.

“I asked Mam’ Baleka (Mbete) and was like, ‘Mama, I need to go back to school, I’ve been accepted, I don’t know what I’m going to do. Can I have funds? Please arrange something for me.’ She managed to speak to (the department) Arts and Culture and they were able to help me,” said Natasha on an episode of Podcast And Chill.

She later explained that she got R350 000 and now R1 million but Tweeps continue to drag her on Twitter for answers.