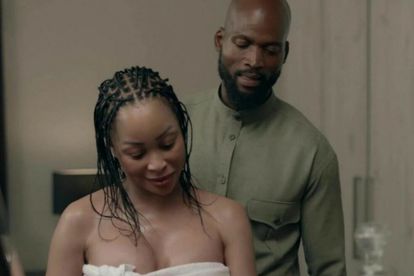 The Wife has gripped viewers with its passion, intensity and explicit nature.

But the question everybody wants to know is – was the scene real and did really the stars engage in a sexual act on screen?

Speaking on a Twitter space hosted by Phil Mphela, the season two lead characters spoke about how they navigated their onscreen relationship and intimate scenes.

‘THE WIFE’ SEX SCENE: ‘THERE WAS NO PENETRATION’

“There was no penetration”, she said of the now viral sex scene between her and her costar.

Khanyi went on to elaborate on the regulations production house Stained Glass had to take to make the scene a reality.

She said: “Number one is hygiene. Number two, there are Covid tests when any character comes into contact with another to make sure none of the actors are put at risk. The actors are then allowed to choose who they want in the room. They are given a shortlist of how they are going to shoot this.

The mom-of-one also revealed that there was a safety measure called a “green tape” put into place to protect actors in sensitive scenes.

She continued: “There is a green tape for the characters so there is a safe line. It is something that you will not see, but we see it and the camera guy knows once I look into that, it means he needs to stop. They have gone past my limit of comfort and safety”.

‘BODY PARTS WERE STRAPPED AND KEPT AWAY’

Asked whether the actors were fully nude in The Wife sex scene, Khanyi responded: “Body parts are protected, strapped and kept away from each person’s body. This is because we are natural human beings, especially men. If there had to be an erection, it would show, and it may put me in a position where I feel uncomfortable”.

“Actors are respected, you do not look at an actor when they are nude. Once there is a cut, characters stand apart and we’re given our gowns in which we are covered and protected”.

Whilst the explicit scene ran for a few minutes, it actually took a minimum of three hours to film as the set had to adhere to health, safety and comfort regulations

Khanyi continued: “Such things can turn into a ‘Me too’ or a sexual assault case very fast if they do not check in. Every position you saw, there was a stop and a start. This thing is so technical, it’s like literally going into an aerobics class and by the time we’re done, I’m so tired and over it”.

The actress also revealed why she chose to show off her bare breasts. She added: “Because I am Zulu, in my culture nipples are honestly the most natural thing. So in African culture, it shouldn’t be a shock factor”.

During the Twitter space Khanyi and Mondli also spoke about how they generated their onscreen chemistry and how they made each other feel comfortable during intimate scenes. The TV stars also revealed how they broke the news of their intimate scene to their significant partners.