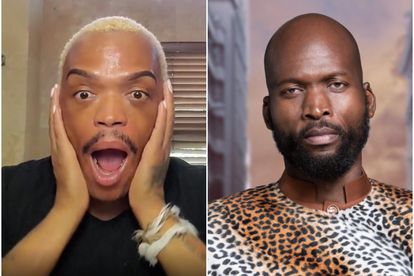 Somizi has made no secret of the fact that he is a die-hard fan of Showmax series The Wife.

He’s also crushing hard on actor Mondli Makoba, who plays Nkosana Zulu. And he’s not alone. After Mondli’s hot and heavy romance with onscreen wife Zandile – played by Khanyi Mbau – the star affectionately known as “Bhuti omdala” has amassed a ton of admirers.

And it may have something to do with a sex scene between the couple which has gone viral.

Taking to Instagram, Somizi gushed over the Umlazi-born actor, who has also starred in soapies Uzalo and Generations: The Legacy.

“Man Crush Monday [MCM] closed for the month”, he posted alongside a picture of the tall, dark and handsome star.

And many of Somizi’s followers agreed with his sentiments, including celebrity pals Winnie Ntshaba, Rami Chuene and Khaya Dladla.

He said in an Instagram video: “Most people think that scene was too much and too explicit. I want to say to Khanyi [and Mondli] that they killed it. That is called acting. Not a lot of people can go there.

“Well done Showmax for going there. There was nothing pornographic about it”.