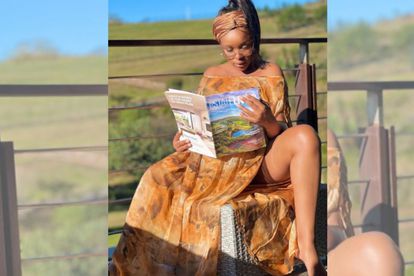 The Wife actress Mbalenhle “Mbali” Mavimbela, who’s been dubbed the “national wife” for her role as Mahlomu “Hlomu” Zulu in the Showmax telenovela has reportedly welcomed her first baby.

MBALI MAVIMBELA IS A MOM?

Sources close to the 25-year-old revealed that she’s taking time off from acting and public appearances to spend time with her newborn and that she welcomed her baby three months ago. The baby’s father is allegedly a prominent Johannesburg businessperson.

The businessman confirmed to the publication that the actress had given birth a few months ago, but denied that he was her baby daddy.

“I am not a celebrity, and I would not want things like this written about me. I just called her after we spoke earlier to ask her if she knows why people are saying I am the father of her child … She is currently in hospital with the baby, and they are both fine. Everyone in the industry knows her boyfriend. I am just a friend.”

The actress, who’s reportedly not returning to the series in November did not offer comment on the matter when she was contacted.

Mavimbela also went on her Instagram story six hours ago to share that she has an announcement to make on Sunday, 21 August.

She also posted a picture of herself holding a book close to her stomach and captioned it “nestling down” on Saturday, 20 August and messages of congratulations from fans and industry friends soon followed.

Rumours of the actress being pregnant began in June when entertainment commentator Phil Mphela announced her exit from the hit series.

In the recent past, her Instagram posts and stories have consisted of either selfies or pictures of herself in loose clothing.

It is unclear whether Mavimbela will be a part of The Wife season three as the show has also lost actors  Khanyi Mbau, who played Zandile Zulu, Zikhona Sodlaka, who played Mandisa Zulu as well as his Mondli Mkhoba who played Nkosana Zulu.