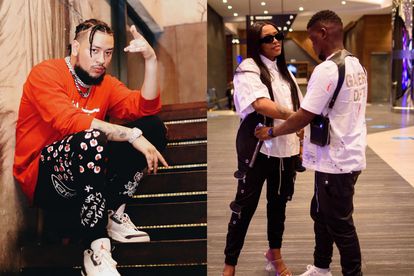 On the latest episode of DJ Zinhle: Unexpected which aired on Saturday 16 October, DJ and businesswoman Ntombezinhle Jiyane revealed that she wants to get AKA and Murdah Bongz to get along.

FATHERS OF ZINHLE’S CHILDREN – AKA AND MURDAH BONGZ

In the current episodes of DJ Zinhle: Unexpected, the DJ is juggling work and her pregnancy. In the latest episode of the series, she reveals that she is attempting to get AKA and Murdah Bongz to get along.

AKA whose real name is Kiernan Jarryd Forbes, is DJ Zinhle’s ex-boyfriend that she shares a six-year-old daughter named Kairo Forbes with.

Murdah Bongz, whose real name is Bongani Mohosana is the businesswoman’s current boyfriend, who she welcomed her second child with on 8 September. Murdah Bongz also has a child from a previous relationship.

ALSO READ: Here’s why DJ Zinhle HAD to tell Kairo Forbes about her pregnancy last

DJ ZINHLE WANTS AKA AND MURDAH BONGZ TO GET ALONG

The Umlilo hitmaker said that blending AKA and Kairo with Murdah Bongz and his child is going to be a difficult task if they do not get along.

“So that is the hardest question. So how am I going to blend Bongani and his kid with me,” said Zinhle.

“So how am I going to bring Bongani and his kid with me? So there’s Kiernan and Kairo on this side and Bongani and his child on the other side. I need to find a way to make Bongani and Kiernan get along. Thats the only way this is going to work,” she continues.

She explained that blending her family would be difficult unless the two “baby daddies” get along. Her brother joked that her two children, who have two different dads and therefore, two different surnames are like “multicoloured popcorn”.

In the episode DJ Zinhle is getting back to doing gigs after the effects of the national lockdown due to the COVID-19 pandemic.

The series was filmed around the time DJ Zinhle was four months pregnant. Just a month after giving birth to her second child Asante Mohosana, she got back to work last week!

ALSO READ: R200k gift, but how did Oskido react to the news of DJ Zinhle’s pregnancy?