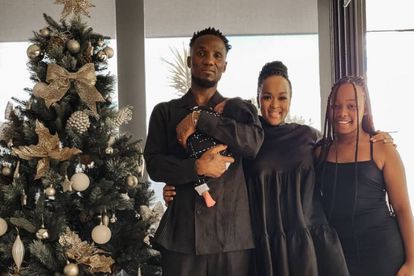 Former South African soccer player Teko Modise and his wife Koketso Chipane shared the first photo of their son on Instagram on 25 December.

Teko Modise and his long-time girlfriend Koketso Chipane tied the knot in a traditional wedding earlier this year. Koketso revealed that they were expecting a baby boy in October after she shared a beautiful pregnancy reveal video.

Teko and Koketso welcomed their baby boy to the world on 13 December according to “The General’s” Instagram stories. Take a look…

Teko and Koketso shared the first look at their baby boy on Christmas Day with a family photo. The family was dressed in black, including the newborn baby.

The retired midfielder also welcomed a daughter with his ex-wife Felicia Modise in 2010.

“Merry Christmas from the Modises ❤,” the post was captioned.

The former Mamelodi Sundowns player said that this pregnancy was different because it was planned. He explained that he got to go to all the scans and be there every step of the way so he feels like this is his first child.

“What I liked about the pregnancy is that it was actually planned. I got to go to every scan. To me it felt like the first baby because all of the stuff that I never used to do. (It was) because I was still a footballer and training and all of that stuff,” said Teko to MacG on an episode of Podcast And Chill.

“So to me it feels like the first baby that’s why I’m so excited about it,” he continued.

Teko also revealed that his first marriage did not work out because he was not ready for marriage. He explained that his ex-wife was already pregnant and he took responsibility.

“The first marriage… I wasn’t ready to be honest with you. When it happened, we were not dating. So I was scared to be what my father was to me. She was pregnant, so I decided to marry her because she was pregnant with my baby. I took responsibility,” said Teko.

“The problem was that I learnt about the person in the marriage, I didn’t know who the person was and it was really difficult for me because I wasn’t in love with this person,” he continued.