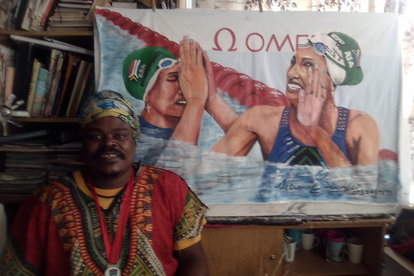 Controversial South African artist Rasta The Artist proudly shared photos of the latest artwork on his Twitter page. This time the person who had all the artist’s attention is Tatjana Schoenmaker, the South African Olympian who made the entire country proud by bagging herself a gold medal at the Tokyo Olympics.

South African painter, Rasta The Artist has built himself quite the reputation when it comes to ‘honouring’ Mzansi celebrities and prominent figures with portraits that don’t always resemble them. The lastest person to be honoured by the dedicated artist is none other than Tatjana Schoenmaker.

Rasta’s portrait of the star Olympian comes after Tatjana was able to secure herself a gold medal while also setting the world record for her amazing swimming abilities in the 200m breaststroke at the Tokyo Olympic Games.

Taking to his Twitter page on 3 August 2021, Rasta shared the snaps of his work along with this caption:

“Our Golden girl T. Schoenmaker made us proud by obtaining a Gold medalist breaking the record at the Tokyo Olympic. #TatjanaSchoenmaker #Olympics2021 #Olympics #TokyoOlympics”

Mzansi is pleasantly surprised…well most of them at least

While Rasta’s work this time is visibly better than his previous work, not many seemed to think so. A lot of comments were dedicated to asking Rasta what he was smoking or drinking. Some South Africans were however quite pleased with his work and shared good thoughts about it:

Meanwhile, tweeps fear a Shona Ferguson painting may come next

Many South Africans have hilariously expressed their anxiety over Rasta deciding to paint the late South African actor, Shona Ferguson. A lot of them warned him not to while others wondered out loud if he may actually do a good job: